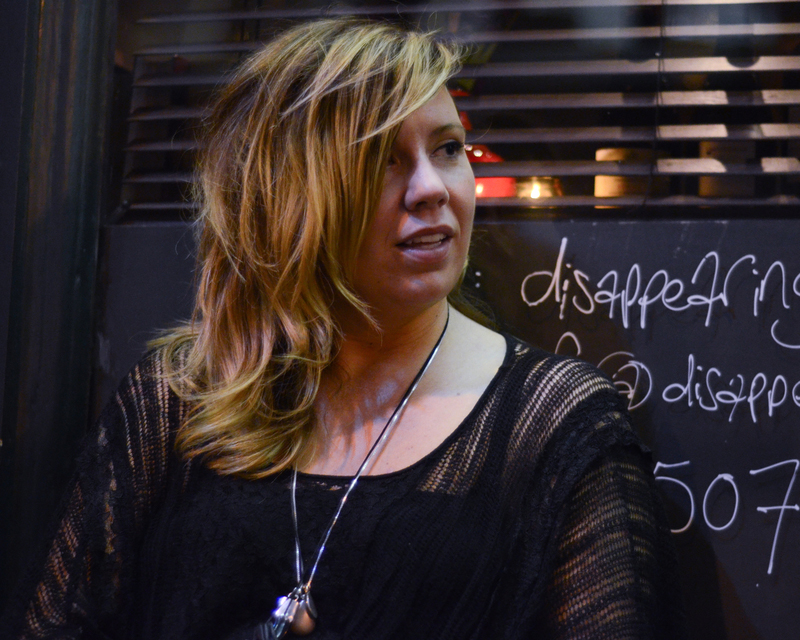 Autumn seems like the right time to be chatting to Love Inks. Their debut album, ESP, feels very much in season, with its sweet, velvety vocals and crisp, cool highlights. Listening to it feels like sitting in a cosy pub drinking ale while watching falling leaves dancing in the breeze outside.

The band is a trio from Austin, Texas – Sherry LeBlanc on vocals, Kevin Dehan on bass and Adam Linnell on guitar. They describe their sound as minimalist pop, and spend hours reducing their work into short, simple, emotive songs.

The three say they don’t set out to make deliberately Texan-sounding music. “I think people expect us to make a kind of Southern rock, and that’s not what we do,” says LeBlanc. But they do think living in Austin affects their work in ways they might not always be aware of – that perhaps their calculated, meticulous song-writing is made possible by living somewhere where time moves slowly, where “sometimes you just have to lie by the pool all day because it's too hot to move”.

And there is a warm nostalgia evident in some of the songs on the album, such as Down and Out, or Too Wild. To stretch that autumn metaphor further, they hint at long, languid summer days somewhere in the past.

LeBlanc and Dehan are a married couple, and Dehan and Linnell are best buddies from way back. Does it annoy them that people tend to hone in on those facts? “Nah, I think it's sweet,” says Dehan. But their lyrics do feel very relationship-based and personal – I wondered if they ever worry when hearing one of the other's lyrics that the words are about them. “I didn't, but I will now…” says Linnell. “I used to, when Kevin was in another band and I used to go see him play,” says LeBlanc. “I used to get angry and go ‘Hey! That’s not right!’ But I realised they’re not about anyone in particular.”

And they say their lyrics really aren’t that specific – while grounded in the realities of life and love, they’re approached in a way that makes them evocative rather than descriptive, allowing them to speak to a wider audience. LeBlanc says her songs might be inspired by something that has happened to her – “like a phone call from my mom” – but then she tries to widen their scope. “If another person can hear a song and not think 'oh, that's something that happened to someone else' but instead go ‘oh, that's just like me when…’ then I think I've done my job as an artist.” “It's not about experiences, it's about emotions,” adds Dehan.

I told them I’d describe ESP as the soundtrack to a David Lynch film, if he’d set a film in Texas. They quite liked that. “Although maybe we’re not that creepy,” said LeBlanc.

The music does wander off into another realm occasionally though, led there by the trio's fascination with things unusual and unexplained. They mention a US radio show called Coast to Coast that airs in the early hours of the morning – a show that perhaps only Love Inks and truckers tune in to – where people call in with their strange stories of the paranormal and the DJ accepts them all the same blasé manner. The album’s title is a reflection of their interest, and LeBlanc points to the song In My Dreams, saying it’s about “dreaming, and entering a dream world, and how maybe some of it stays with you when you're awake”.

Their name too, comes from a chapter in an old book on witchcraft that explains how to make ink for a love letter from the ashes of old love letters – a darkly sweet and poetic notion that fits them well.

Looking at LeBlanc and Dehan, the fascination with such things fits – they’re both dressed all in black and hung with a myriad of pendants and amulets, LeBlanc’s giant silver rings clinking as she talks. Linnell is different; in jeans and Converse, he looks more like the boy next door in a 1950s suburb.

The difference is nice – rather than an entity in itself, Love Inks seems very much a meeting of three distinct individuals. “We’ve never come up with a song through a jam session” says LeBlanc, explaining that it’s more a case of one of them bringing a fairly resolved piece to the others and taking it from there. You can hear it in the music – the elements of vocals, bass and guitar sound clearly separate and the restrained arrangements allow them each to shine. They’re united by what could almost be considered a fourth member of the band – the drum tracks. Painstakingly crafted, mainly by Dehan and Linnell, they’re recorded first on a seventies synthesiser for that vintage sound and then transferred to a new model to be manipulated more easily.

The band recorded ESP at home on an eight-track and say the analogue approach was just what they needed, giving them enough time and mental space to achieve the sound they wanted, and to edit a vast amount of songs and ideas down to a collection they were happy with.

The three certainly come across as perfectionists, with a clear idea of what they want to achieve. Before they even began playing together they’d spend hours just discussing what sound they wanted to go for. Dehan mentions he’d recently rediscovered the notes the band made back then – abstract lists of words that described what they were after. “Desert” was one of them. Linnell, in describing what he’s trying to achieve with guitar, says he’s attracted to Scandinavia and “vast, white snowy plains”.

Giving the three one artist each to cite as a source of inspiration or just someone they simply like, the responses were suitably individual and varied. LeBlanc is a big fan of James Blake at the moment, and says she loves what he’s doing with his voice and how he’s experimenting with his music. Linnell chooses Björk – again with the Nordic theme, and because she’s an artist that's pushing her music to the edge. Dehan, bless him, cited ZZ Top, perhaps, he thought, because they’re that little ol' band from Texas, but mainly because after being so restrained in his own music it’s nice to occasionally blast his eardrums with something loud and loose.

I admire their approach – perfecting a craft by honing in, focusing on creating something small and perfectly formed. So where do they go from here? LeBlanc says her time on tour is helping her to discover new qualities in her voice – something she wants to explore further. And Dehan says they’re starting to feel more comfortable with digital recording, which opens up a whole new world of possibilities. Having started with an album that was all about restraint and reduction, perhaps now they feel they can let go a little. Maybe even add some stuff.