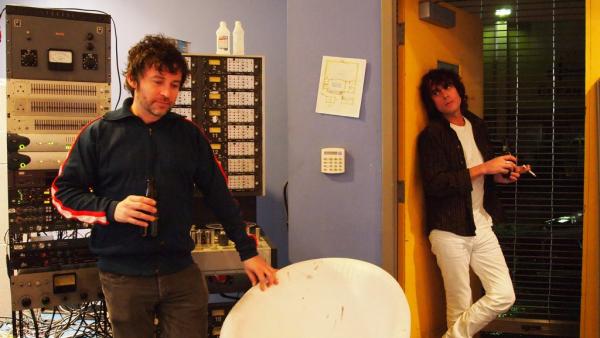 A few years ago a song dominated my summer – ‘Stacy’s Mom’ by Fountains of Wayne – it was the ultimate catchy pop rock tune, and it still to this day makes me smile. When I heard that members of the band had formed a new project with a Russian oil painter, Ari Vais, and that their new material had a fun, 90’s, R.E.M. feel, I nearly crashed my car into a post box. It’s emails like that which is why it’s illegal to use your phone when driving. Anyway, before they head off on an almost secret UK tour as The Campbell Apartment, I posed some questions to their main man Ari.

Q: Your tour of England – what are you most looking forward to doing when you're not on stage?

The usual thing, pal-ing around with my band-mates, drinking pints, seeing the lovely English countryside, and meeting new people. I used to live in the UK, as well, and have returned to visit probably 100 times, so it'll be great to see all my old friends.

Q: Some of the band are in Fountains of Wayne – whom had a pretty big hit here in the UK – how will touring as The Campbell Apartment be different to touring with them?

I've not toured with them per se, but have seen them live many times since three of the four of them are like brothers to me. I think this may differ from a FOW tour because our music, whilst extremely catchy pop rock like their music, is more twisted, druggy, hairy, and instead of giving it a hair cut we revel in the shagginess – The Campbell Apartment is like Fountains Of Wayne's unruly younger brother who desperately needs a bath.

Q: Who will you be sharing the bill with over here? Anybody we need to be aware of?

We're playing with lost of different people, but the Crookes (who we're playing with at Bucks University) are a band I like a lot, they remind me of the Strokes) and there's a chap called Liam Dullaghan we're playing a bunch of shows with, who writes really good songs and is a nice bloke as well.

Q: Are you worried that, like a lot of bands who have history, people will be asking you too many questions about Fountains of Wayne?

I love Fountains Of Wayne, I'm proud to be associated with them. There's not a lot of literary rock n roll being made out there right now, pop music for intelligent people, that speaks to me.

Q: What are Fountains of Wayne up to these days?

They have a terrific new album out on Yep Roc Records called Sky Full Of Holes – Jody from FOW is touring with The Campbell Apartment as our new record, ‘In’, is released, between US and European legs of the FOW tour.

Q: Enough of that!!! OK, so The Campbell Apartment – when do we get to hear your records, and what will they sound like?

Our first album, “Insomniac's Almanac” was called the 4th best album of 2008 by the Village Voice and is up all over the interwebs if you'd like a listen. The new record, which is very different, is available at the shows on the UK tour, and then will be released globally by Light Rail Records the day the tour finishes (27 October at the Bull & Gate in London). I'm sure it's already up for theft online if that's your bag, but check it out. It's much less new romantic than the first one, and way more fun, tipsy, swaggering and balls to the wall – but the songs are still insanely catchy. Beatles catchy.

Q: Music is pretty bland across the board just now – what do you do that's going to shake things up?

Writing great songs. It's as simple as that. It's simple to say, simple to recognize, but not easy to do. When rarely someone does it, everyone will notice. Mediocrity is all the layers that are beneath our feet before you get to the center of the earth. Anything excellent bubbles up to the surface, and people notice.

Q: What do The Campbell Apartment stand for? What's your ethos? What's your message? What are we going to learn seeing you live?

Not letting so so songs see the light of day. Writing and singing songs which will make people feel stuff. Seeing us live, you'll come away feeling like you were just at a really fun party, where the band and the crowd are all in on it together, it's a fun loving live show, and our music will leave you feeling – if you're a musician – damn I wish I'd written that – and if you're a listener – that's stuck in my head now and I think I like it.

Q: What's the craziest gig you've ever been to or been a part of?

I don't know. I can't remember 10 minutes ago, but less things that happened last night or beyond. I was once working at Mrs. Fields Cookies in Boston as a boy, though, and Bruce Dickinson from Iron Maiden walked in and ordered a white chocolate chip macadamia nut cookie. I said, not being able to help myself, “You're Bruce Dickinson!” and he sniffed “I just want my cookie”. It's pretty hilarious in hindsight, but at the time I was unimpressed and stopped listening to Iron Maiden and started listening to Husker Du.

There was this shark incident. Jody was fishing from the hotel balcony and caught a shark, and there were all these groupies about…. oh wait, that's Zeppelin. I'm not sure, this tour will probably trump anything else that came before it, including acts we deeply regret, so ask me again in a week please. In Newcastle I plan to be very very naughty, because I've just heard it's that kind of town.

Q: Do you manage to balance a life on top of being a recording artist traveling the world?

I do – I live in San Francisco and paint oil paintings, which is a very quiet and lovely way to pass the time – it's a perfect counter balance to rock n roll, which as you know can be (and hopefully is) very loud, and not very solitary at all! The two things, which I adore equally, center me.

Q: What will The Campbell Apartment be doing this time next year – and we'll award extra points for accurate future telling.

The Campbell Apartment and Fountains Of Wayne will form a 10 man super group, and we'll tour the world wielding real axes instead of guitars, and fight crime in a most bloody and brutal and almost comically grotesque manner.

Seriously, in a year we'll be a household name. That's how much I believe in this new record, ‘In’, one of the best rock albums of all time.

The Campbell Apartment are on tour across the UK this week, at the following haunts.