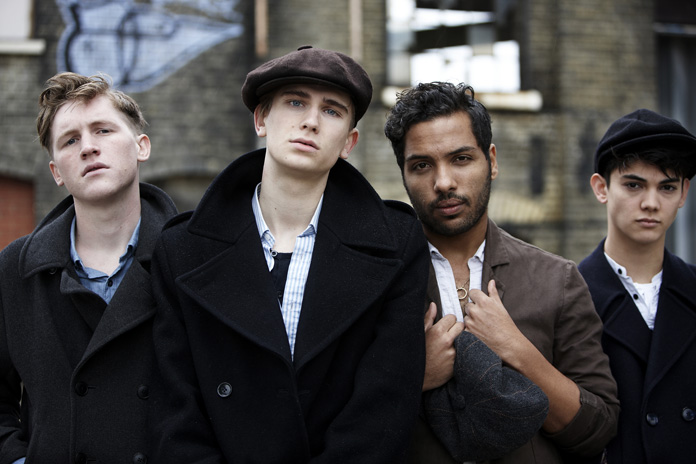 If you thought Cornish music was all about pasties and sea shantys, think again. Crowns have arrived and want to shake it up.

1. For all those readers out there that don't know too much about you, (shame on them!), tell us a bit about Crowns to date.
We’re a ‘fish-punk’ band formed roughly 18 months ago (we forget!). We play music inspired by traditional Cornish tunes. That’s about it so far!

2. So, your EP is out in March. Tell me about it. Are you excited to be getting it out there?
Very excited! It’s what we do distilled into 6 tracks. We’re releasing it on St Piran’s Day (the patron Saint of Cornwall) which is cool. It was pretty much recorded live in London and Cornwall so really captures our sound.

3. You've got some pretty big names with the likes of Zane Lowe and Mike Davies backing you. Did you ever expect that to happen?
We knew it was pretty important that they did like it – so yeah glad they do! Because we’re always looking forward, it’s great when you step back and have a look at the stuff we’ve achieved so far.

4. You've not long finished touring with The King Blues, you're headlining at the moment and then you're off out on the road with Sharks. That's pretty impressive. How do your headline and support shows differ?
With support slots, you’re there to warm a crowd up – which is harder in one sense. But, if you end up winning the crowd over you get a whole load of new fans. But the headline shows, especially in Cornwall, are pretty wild.

5. What would be your ideal gig line up both to watch and play in?

Dream line-up – us and Sharks. We love them and you can catch that tour in March!

6. 2012 is starting in a pretty good way for you guys. How are you planning on building on that?

Mainly by playing as many shows as possible. We’re going to do our album before the summer too – giving us plenty of room to play festivals.

7. I swear like a sailor and can probably drink you alll under the table (as long as you don't bust out the Sambuca, that's totally my Kryptonite) when are we going out?

Agreed – Sambuca isn’t good. But these are dangerous words my friend. You’re very welcome to come to a show and prove yourself!

8. Any final words to the readers of Glasswerk?