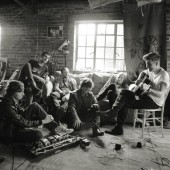 Tom Williams and The Boat Q and A

In and amongst their busy schedule I managed to get a quick chat with the guys from Tom Williams and the Boat. Here’s what they had to say!

Just in case any of our Glasswerk readers don’t already know your music, can you tell us a bit about your band?

We’re a 6 piece from Kent and we make a racket with guitars, keyboards, saxophones and violins.

And who are your main musical influences?

I’d say the Holy Trinity of Dylan, Springsteen and Young as well as folks like Elliott Smith, Pavement, and Nirvana.

We’re running an exclusive stream of your new single Teenage Blood. What can we expect to hear?

It’s a big country rock stomper with a sweet chorus, and most importantly, a fiddle solo! The video is fun too, it’s a period drama with childhood cowboys, stick ups and a model railway.

And your album comes out in April. It’s partially funded through Pledge Music – how does that work?

It’s a great platform that helps bands raise money for a project without the outside investment of a record company etc. It’s basically a pre-order, but we offered fans things way beyond a standard cd and t-shirt bundle. House gigs, write a song with me, original album artwork, cakes baked by members of the Boat…

Do you have tour and summer festival plans so we can see you playing live?

Yep we’ll be doing something a bit special for our June tour which we can’t announce yet, but we’ll be playing plenty of festivals over the summer, so hopefully you can catch us at one of them.

And what does the future hold for Tom Williams and the Boat?

Can’t wait to unleash this album onto the big wide world. The songs were built for mass communication so I really hope people can identify with it. I’m very proud of this album, I think it really works as a group of songs, it’s a proper Album in the best possible sense of the word, from beginning to end.