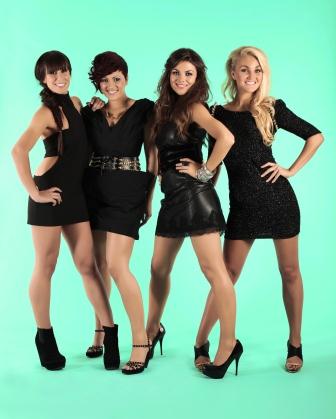 Vanquish are the UK’s hottest young girl band right now. Hotly tipped by the pop press, 2012 could well be the year that Bee, Holly, Lizzy and Rianna take over the charts. They sound good and they look good; always a winning combination.

The girls have an awful lot going on – and we were lucky enough to find out a bit more about what’s coming up for Vanquish.

How did the four of you first get together?

It was an open audition and over a series of stages. During the process we became friends, the chemistry was amazing between us so we were so happy when we found out it was us four that were going to be in the band!

What makes you different from other girl bands?

Our sense of humour, the fact that we genuinely have become best friends and laugh & have fun all the time – we don't like being apart now. I think the sense of fun communicates itself to the audience – we take our music very seriously but not ourselves. We feel that when the 4 of us come together, the energy we create is infectious and we seem to connect with the audience so we instantly feed off each other.

We’ve featured the video of your single, The Harder You Love, on Glasswerk. What can you tell us about the song?

Thank you! It's a really fun pop song written by Jorgen Elofsson, who has written 8 number 1's in the UK and has two Ivor Novello Awards, so we are so excited that he has written our debut single.

And we hear you are working on your debut album?

Yes, that's right. We are in studios a lot recording really strong tracks – we have been so fortunate to have some of the world's best writers working with us and we really love each song. The album will be upbeat and really catchy.

You will be touring with Westlife soon. Looking forward to that one??

Are you joking?!!! We are soooooo excited! For us it's a dream come true. To be performing in the UK's biggest arenas is just amazing. We grew up listening to Westlife so to think we are supporting them for 30 dates across the UK is just fantastic. We can't wait!

Yes, we have several major Pride Festivals across the UK including Birmingham and Blackpool – we love performing at those – plus the Penn Festival and several others – and we are just waiting to hear about loads more – so it's going to be a very busy summer for us.

And what will the future hold for Vanquish?

Our second single will be out later in the year, so another video (which we love making) more appearances, more gigs and then the album. We just want to make really great music that people will enjoy. We've just been approached last week to see if we'd like to feature in a new British film too – how cool is that?