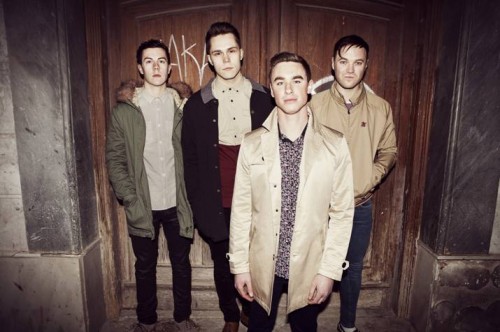 Hi guys, we know you’re busy with the promo for your new single, tell us in 10 words or less what it’s about?
It’s about dudes who ditch their bros for their hoes.

You’ve just come off tour with Four Year Strong, and the Used, how were they?
Insane! FYS are one of the tightest bands we’ve ever played with, and fantastic dudes. The Used have got a back catalogue of absolute bangers – so much fun to watch every night!

Were you fans of their music before you went on tour with them?
Yeah we were massive fans of both bands. We all used to rinse the first Used record when we were at school – such a great band. FYS have been going from strength to strength over the last few years and are continuing to boom – it was a proper honour to share the stage with those guys!

How does that effect the experience of touring?
It’s always nice when you’re a fan of the band you’re on tour with. It makes the gigs so much more boss when you’ve come off stage and then you get to kick back and watch a band you really dig.

Who’s the biggest ladies’ man out of all of you?
Ladies and Gentlemen – Mr Tom Doyle. The guy is an animal.

If you don’t have a ‘what happens on tour stays on tour’ policy, are there any great tour secrets you can share with us?
On our last tour we had a bit of a situation we don’t really talk about. Basically, on those LONG van journeys, sometimes it is necessary to let nature take its course inside the van – using an empty plastic bottle. One of our number was engaging in this pursuit, only to find out his seemingly intact receptacle had been the victim of our tour manager’s penknife some hours before. It was messy. Many people got covered. A bad evening all round.

You have a new album out later this year, tell us about the sound, is it like your other material?
We like to think it’s a big step up. It’s definitely a progression from out earlier stuff, but the catchier bits are catchier, the riffier bits a riffier, and the songs are just a bit more well crafted than before.

If you had to describe it as a person, how would you describe your sound?
I would describe ‘him’ as a pretty boisterous, heavy handed, unsubtle, fun-loving, intelligent as hell, modest (haha!), occasionally sensitive, great lad.

Where’s your favourite venue to play in the UK and why?
That’s really tricky, the UK has a lot of great venues. We’ve always had great shows at The Twist in Colchester. Newcastle Academy has always been really good to us. If I had to choose an absolute FAVOURITE, it would be PJ Molloy’s in Dunfermline – a Scottish town which always represents and knows how to have a damn good time.

You’re doing lots of festivals this year, are you looking forward to any in particular?
I personally can’t wait for Slam Dunk. It was off the chain last year, one of our stand out favourite shows. This year we are on a bigger stage so hopefully the party will be up-scaled!

Which other bands on the line-ups are you looking forward to seeing?
Every Time I Die and Taking Back Sunday at Slam Dunk. Pretty pumped for Metallica doing the Black Album at Download – I learnt how to play that whole thing on guitar when I was 16… Will be awesome to see that live back to back.

2012 is the year of the holograms, I’d love to do a duet with Lisa ‘Left-eye’ Lopez, who would your ideal hologram duet be with?
She is a babe! Didn’t she feature on a Mel C tune? – I would be keen to do a duet with Elvis – he’s still the all time smoothest mother of them all! I’d get him to teach me some killer moves.

Is there anyone you wouldn’t want to work with?
I’ll try anything once – I like to think I can find the good in anybody!!!

What is your most hated interview question?
‘Where did you get the name ‘Don Broco’’ – I hate that one! Thanks for not asking it! Nice one!

What’s the answer?
ARGGGHH – Just when I thought you were great guys! Basically we wanted the name ‘Don Loco’ but apparently there’s some big dog German rapper called ‘Don Loco’. So picture the scene – there we are truly stumped! At this point I broke my arm playing footy, I came to see the boys with my new cast, and Bobby jokingly called me ‘Don Broco’ – it just kinda stuck!