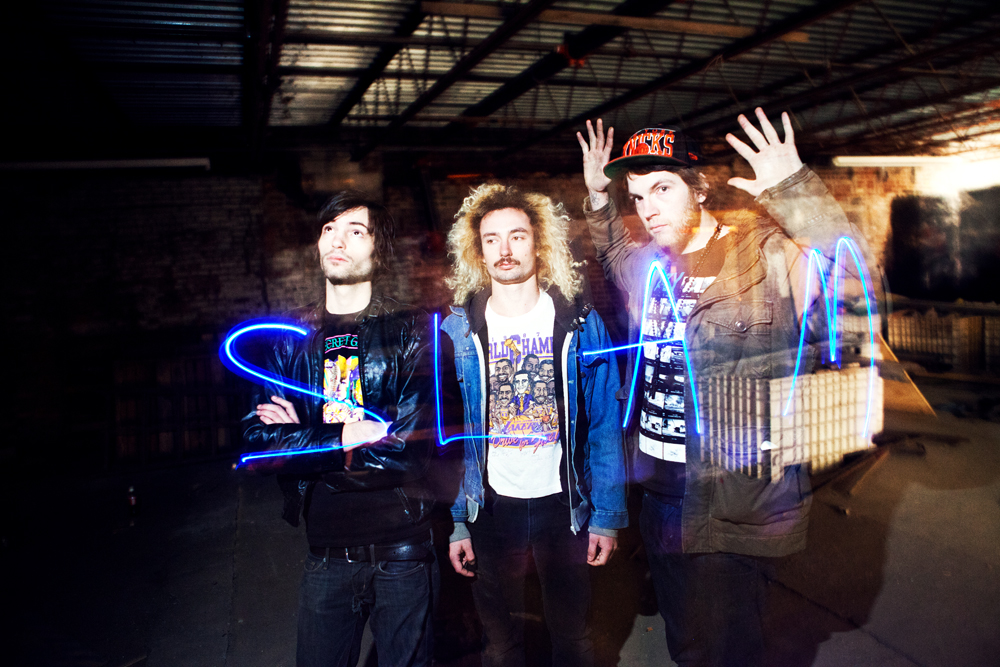 Slam Donahue are a New York City based band led by singer/guitarist David Otto and bassist Thomas Sommerville. They build their identity out of bootlegged recording programs, department store keyboards, and keen, thoughtful melodies. After meeting as youths, playing in rival bands, and then finally collaborating; the duo’s skills grew to complement each other in their attempts to test pop music’s conventions. Sometimes skirting into new wave, R&B, hip hop, they are after something new and beautiful….

Tell us a bit about the history of the band. How long have you been together?
Thomas: It’s the typical, overly complicated weave of on the spot band names, rotating lineups, and songs traded back and forth. We are the result; what shook out of a misspent youth in house show bands; the polished rocks after tumbling forever.

How would you describe your music?
Thomas: We play pop music. It is all melody and structure. We try to pick keyboard patches that sound interesting and compliment the vocal melody. It’s hard to remember how you had all the settings each time you record. We try to do what is musically satisfying to our tastes.

You’ve a new release Big House Nice Dreams out. Tell us about that one.
Thomas: We wrote and recorded it at home. To have it released is a shock but very flattering since it represents us fully. Every flaw was our fault but I’m very happy we could release something so raw and true.
Dave: Download it free at slamdonahue.com and then you tell me about that one.

And where did the name Slam Donahue come from? It’s certainly different!
Thomas: In the area we grew up, there was no shortage of down time to think of band names. I’m not going to say drugs were probably involved because they certainly were.
Dave: I like it because it doesn’t remind me of anything else. I feel like people won’t be able to categorize us by our name, or just won’t know what to expect when you say, “Hi, we're Slam Donahue”.

You’ve recently signed with Cantora Records after releasing mainly mix CDs. How will that change your musical approach?
Thomas: We spent most of our advance on poor decisions. With what we had left we did book some studio time. Luckily our friend Ayad Al Adhamy from Passion Pit helped out on the cheap and we did an EP coming out on Cantora soon.
Dave: I think the trick is to not change our approach at all. It’s a strange thing where I like pop music, but I don’t like the “sound” of it. I just like how melodic and refined pop music is. But I like much more grungy sounds than those usually associated with it. This might be because I grew up writing on a boom box tape recorder, but either way I love the grainy texture of tape. We're going to keep emulating that until we find something we like better.

Will we see you out on tour in the UK anytime soon?
Thomas: We’re so poor. If we could get some cheap tickets and find some couches to stay on it’s possible. Right now I’m scraping up quarters to ride the subway.
Dave: Well, I set a goal for us to do our first tour by the end of the year. Whether that’s in the UK or not depends on if they want us. I’ll go anywhere we're wanted but I can’t wait to go exploring in general. I haven’t seen much yet and I heard there are a lot of towns out there.

Have you got any festival dates lined up for the summer?
Thomas: We’re doing a two day thing in Brooklyn soon. The Walkabout Festival. They are all a formula for drunken sun stroke which can easily be mistaken for a spirit journey.

And what does the future hold for Slam Donahue?
Dave: I’d like to know that myself.
Thomas: We’re releasing an EP called Hemlock Tea, a handful of music videos and doing a lot of performances. In the far future, there will be statues of us in every town square.