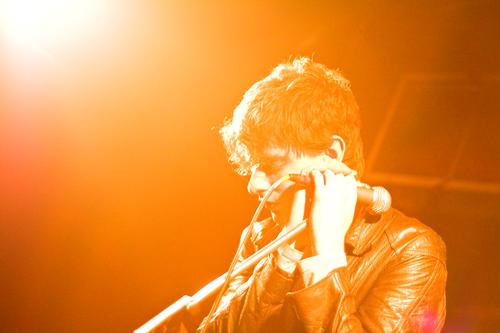 Various Cruelties is the mod/pop/goth incarnation formed by Liam O'Donnell in 2010. Their debut album, titled Various Cruelties, was released earlier this year. I was lucky enough to have a brief chat with frontman Liam.

1)How did you come up with the moniker “Various Cruelties”?

I’m a fan of the painter Ed Ruscha after seeing some of his work in the Tate Modern a few back. He was a contemporary of Warhol and Lichenstein. After I found out some more about him I realised he had done the sleeve for the Talking Heads “Sand in the vaseline” compilation and was pretty integral to the Pop Art scene. He has a painting called Various Cruelties and as soon as I saw that I knew it had to be the band name and the album sleeve if we could afford it! Which of course we couldn’t the latter!

2)How was the recording process of your album last summer?

It was the best time, being in LA recording with Tony Hoffer who we get on great with. It was pretty laid back yet full on. Through a friend out there Emily we actually got pretty close to meeting Ed Ruscha as well, as she had done some work for him. I think he lives in Culver City but it didn’t quite come off which is a great shame. But generally it revolved around hotel rooms, WWF wrestlers and Miss USA winners…usual stuff really.

3)You are playing Kendal Calling this month – what can we expect to see from Various Cruelties at this?

We’ll playing most of the album tracks plus the b-side to our next single Chemicals, a cover of Ian Brown’s F.E.A.R.

4)Have you any more shows/tours planned for this year?

We’re playing Y Not Festival after just playing Barn and Lounge on the Farm, then going back in to do more writing and recording. There is a Welsh show soon to be announced which we are really excited about and hopefully may get to the US as things are starting there for us.

5)Have you made any work towards a follow up to your self titled album?

We never stop writing really and we plan to start recording shortly. We might even sneak a brand new track out before Christmas we are really excited about.

6)Who would be your greatest musical influence?

Today it’s Rodriquez who I was lucky enough to see at The Troxy last week. There’s an amazing documentary coming out about him called “Searching for sugarman” made by the people who did the “Man on wire” film. It’s truly humbling and inspiring in equal measure, this guy who is relatively unknown from Detroit who released 2 albums in the early 70’s which barley sold a copy. Many rated him as highly as Dylan, but he ended up selling 500,000 records in South Africa and being the soundtrack to the end of the Apartheid without ever knowing until 20 yrs later. It’s such an amazing story, almost unbelievable. If you haven’t heard the album Cold Fact, buy, beg, borrow it. It’s classic.

7) What can we expect from Various Cruelties for the rest of 2012?

Make sure to check out the band as they play Kendal Calling at the end of this month. you can also check out the video for their latest single, Chemicals, here: link