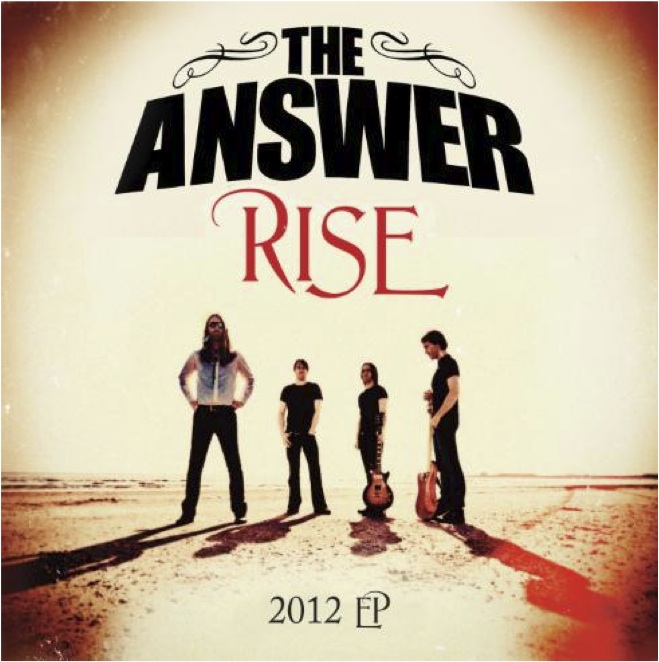 July 2nd saw the release of a new EP from The Answer entitled 'Rise'. Released on their own TAP label, the EP features the highly anticipated title track from the band’s 2006 debut album ‘Rise’ which has until now remained unreleased, and also contains new Celtic tinged rocker ‘Lost’. Glasswerk caught up with the band recently to find out more.

Tell us a little about your new EP ‘Rise’

Its a bit different to anything we've done before. The title track “Rise” has a forty piece orchestra playing on it for a start. Its a great tune that has been kicking around for a while. But we feel that now is the time for people to hear it so heres hoping our fanbase will enjoy it because we're proud of it!! There's also a belter of a tune on there called “Lost” which is probably the most Celtic sounding track in our repertoire. All in all its a great EP…but I would say that.

There’s an acoustic version of Rise on the EP as well. Is it important to you that your songs can work stripped back as well as in their heavier format?

Its not essential but its always nice when it works out like that. I think it shows that the song is a good stand alone track and that our song writing is continue to develop and move in the right direction.

How was it playing with the Ulster Orchestra, and how did the collaboration come about?

Unbelievable…its always been a dream of mine to play a few tracks with Ulster's own symphony orchestra. I always thought it would work really well because I know there's more to our songs than just turning up loud and wingin' it. We were offered the chance to collabarate as part of the Ulster Hall's 150 year anniversary celebrations so of course we took it. It was a great way to introduce the song “Rise” to the wider public and the fact that it was streamed all over the world meant we were able to connect with alot of people.

You’ve got lots of European dates lined up over the summer. How does gigging on the continent differ from playing shows back home?

Every gig is different no matter where we go and just when you think you're getting to grips with a particular city or country's audience something crazy happens that turns those pre-conceptions on its head. Generally however a rock audience in germany or Italy or anywhere else in Europe just want to have a good time and enjoy the music so we're all the same in that respect.

What’s your favourite festival to play?

What’s the song you most look forward to playing live, or does It change from night to night?

You've supported some huge bands through the years. Who was your favourite band to share a stage with and is there anyone else you would like to tour with in future?

I've got to say ACDC because for a start we got to know those guys the best and they really looked after us. They also happen to be one of the greatest rock n roll bands of all time. If the Black Crowes went back on the road I probably wouldn't turn those guys down.

It seems like the music industry is focusing more and more on live events than anything else at the moment. This must be great for a band like yourselves who have so much experience in this area. Do you feel it separates the men from the boys in terms of there being nowhere to hide in a live situation?

For sure…if I go to see a band live and they can't cut it I'm automatically dismissive. Its just so important to get up there and make people believe that you deserve to be there. We realised that right from the beginning and its kept us right ever since.

What can we expect in the future from The Answer, any hints on what album four will sound like?

We're working on number four right now and its sounding great. So in a nutshell…lots more ass kicking rock n roll!! We'll see you all soon wherever you are!!!