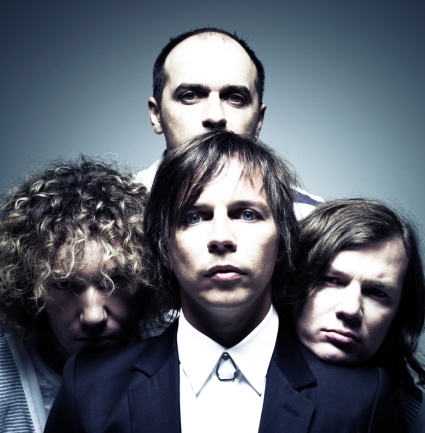 What happened when our roving reporter Chris Droney spoke to Russia’s most intriguing and obscure indie rock export Mumiy Troll? We’re not really sure, but we left feeling all warm and fuzzy inside…admittedly that might have been all the vodka.

Hey guys, how has your summer been so far?

It’s been busy; we have been travelling a lot, we were actually travelling on board a really huge old sailing ship called Sedov – which started its voyage around the world in May. So we as a band have been on board for most of its journey flying under the white sails in the ocean, we were not only performing normal marine duties but also recording a new album on board. We’ve played concerts in London (which was part of the Olympic opening ceremony) and also in places like Germany, Finland and the Baltic states.

Your latest album, Vladivostok, is to be released in the UK next month (Sept 3rd), what can you tell us about it?

Buy it or at least just download it. Vladivostok is our debut English language album, which represents what the Mumiy Troll spirit is to the people who do not understand us in Russian. It is named after our home city where most of the band members and myself grew up. It is a remote place on the Russian Pacific, which once was called Russian San Francisco. Still only in our dreams really though…you get the picture. If ‘Somebody to Love’ was ever written on the other side of the Pacific in 2012..that’s us.

Your name translates to “The Mummies’ Troll”, how did you come up with such a name?

Russian ‘80s prog bands were always obsessed with the idea of taking names from fairytales. I guess I was under their influence. I always wanted a name that would stick in everyone’s mind and have some sort of legacy, so if you think of Mummies – a mummy is wrapped and signifies eternal life. A troll is a creature in a magical forest who walks around and plays tricks to the sounds of the surroundings. In the very beginning one of my friends said that people would do at least 3 spelling mistakes trying to write the band’s name. I thought it would definitely guarantee us a long history at least with lots of mysteries on who we really are.

You initially started out writing your music in Russian, but more recently you have started to write in English. Has this made a major impact on your songwriting?

These songs that we’ve recorded in English have been heard in Russian before and I would have to say ‘yes’ in a way there has been an impact. Obviously when you translate words to a different language they do not necessarily have the same meaning. So for some songs I had to start writing lyrics from scratch in order to have a true new meaning. But to me writing songs in any language comes naturally, be it Russian, English or even Chinese (I have studied Chinese before and can speak fluent Mandarin).

What can you tell us about your most recent music video, Hey Tovarish! ?

It tells a small story about a boy who sat in front of a television and sees Mumiy Troll on every channel in different formats, let it be an ‘80s music channel, awards ceremony, Power Rangers or The Muppets. It shows that Mumiy Troll is everywhere around you and it is music to your ears that gets you very intrigued. You have no chance of avoiding us – very soon.

What music are you listening to at the moment?

All sorts of stuff. You know with technology these days it’s hard not to pay attention to something that is playing out there.
Right now I have really enjoyed the new Dr. John album. Julian-K are another great band. It truly fascinates me when mature musicians can come up with really lively modern records which combines the best of both worlds. I am also a big fan of whatever Ryyichi Sakamoto does. I like Ariel Pink’s album a lot. I’ve met those guys and apparently we share a taste for a great Chinese cuisine.