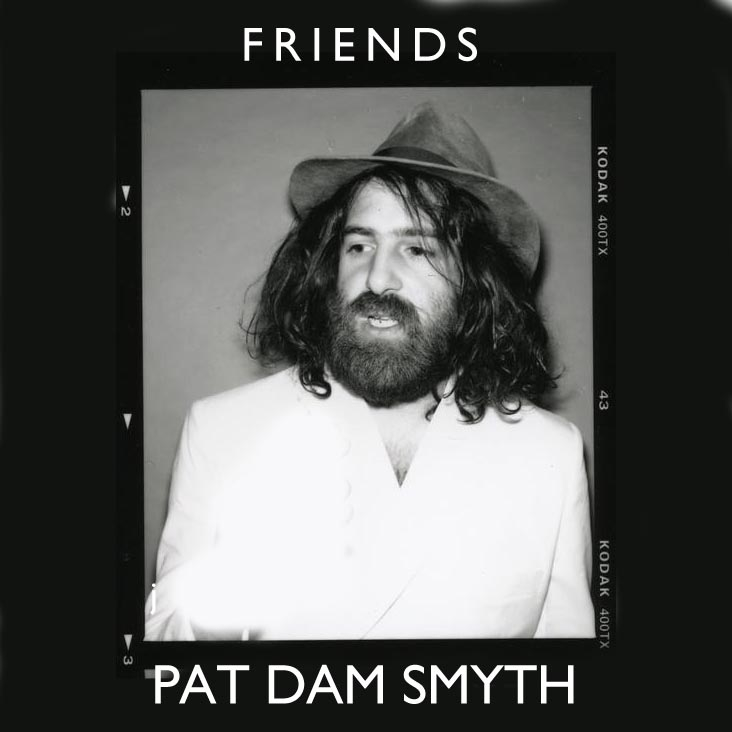 Tell us all about your musical journey, Pat. You played in several bands before going solo?

Yes, I have been in many bands since I was 12. I grew up on a farm in Northern Ireland . So when I met Nipsy Russell on the first day of school we decided to start a band. They have all been mostly punk rock bands. We could play as loud as we wanted as I had no neighbors. Then we moved to Dublin when we left school, and then on to Liverpool . We met Steve Pilgrim (now Paul Wellers drummer) and started THE FOOLS playing with the Noisettes and the 747s and busked all over Europe and West America . Then we moved to London and started a band called Smokey Angle Shades, with ex 747s Ned Crowther and Fred Stitz which was 4- part harmony outfit.

When that fell apart I hit the low time. I recorded my solo album and have been doing so ever since.

Its been a long road and I’m glad I’m still on it.

You’ve also busked in various cities all over the world? That must give you some great stories.

Yep, so many I have forgotten. Its an amazing way to see a city/country. You are playing and observing the whole time. My favorite time was probably when we lived in Athens . We lived there for 2 months and existed purely on busking , eating well and drinking beer. Standing in the sun all day long playing music. Its a nice way to make a living. It can get you out of sticky situations. I found myself on a greek island with no money to get the boat back to Athens . I met a gypsy family who did street painting ,and we walked from town to town busking until I got enough money to go back. I stopped off at another Island and played there in bars for a week. Then we met two girls from LA, they said come over. We packed are busking gear and money ordered flights and we went of to America . One thing always leads to another in the music world. I spent my 20’s busking and I wouldn’t change a thing. It was freedom.

And you had a period where you suffered from melophobia?

Melophobia (fear of music) is not documented well. I had to trawl through the internet to find any material on it.

It happened after a breakdown in London . I returned to Belfast and was terrified by music. Its Hell as you always think no matter how low you feel you got music. But it was gone from me. All my favourite records made me feel sick listening to them. Birdsong was tormenting, silence was the only thing I could stand. Looking back its quiet comical as to how irrational i was behaving. I couldn’t go in to shops because I feared there would be music playing. I would run past bars with my hands over my ears. But like all fears and phobias is to address them and defeat them. The way I could do this was to write music. As this was the only music I could stand. So I would write music and record it so I had something to listen to. Once I started recording the solo album I could feel the phobia slip away. I have had at about 3 times in my life. The longest was for 7 months, just before I recorded.Once I had conquered by own demons I could find I would love music all over again.

I have spoken to a alot of musicians about Melaphobia and I find my self not alone. I spoke to a rather famous house DJ who didn’t leave his house for 2 years because of the same problems. He could only listen to his own music. I do intend to do a documentary on it soon simply because I find it hard to find information on it. I know that writing music is the best way to defeat it. So I try and write every day. I wonder if authors get a fear of words? Thats the next film.

How would you describe your solo work?

Well for a start it is my name up on the Album. I can’t hide behind a band name. So by default it is more personal perhaps more truthful, more honest. A band is a collective, its a musical manifesto and that is amazing feeling to have, the gang. But with the solo stuff it feels closer to the bone. For me it is purely a cathartic endevour and its usually highlighting all the things that have happened to me, my experiences, so It can be nerve racking. But that is what is so thrilling about it. Your passing on a feeling. My life is no more special or angst ridden than anybody elses. We all go through the same stuff , I just have documented mine through music and if it strikes a chord with anybody else then I feel its a job worth done.

Tell us about your new single, Friends, which is out later this month.

Friends is part of the heavier side to the album, THE GREAT DIVIDE. There is a sonic divide on the album. Half the songs are stripped bear and quiet while others are louder and raucous. Its a song that came out of nowhere, and I think its the first take. I am not sure what its really about. At the time it was written I had isolated myself from my friends and society. I guess its just realizing the value of friendship. How all those simple things, like walking home with someone are golden but seemed so normal at the time. Its not anger on the recording, its frustration that I lost the link to the people I love, through no fault but my own.

Your first solo album came out last year to some very good reviews. Are there plans for another one?

The plan is to push forward with the Debut Album, I want more people to hear it before I move to the next. Whilst waiting for the next album I recorded a classical album a few months ago, its nearly finished and should be coming out soon. I have been throwing ideas around with my producer (Portland born Barrett Lahey) for the next studio album and am recording demos at the mo, which I love doing, takes me back to when I was 12 playing around with a 2-track recorder that my dad gave me.

So what does the future hold for Pat Dam Smyth?

I don’t know, which is very exciting.. I will be touring a lot, I am happiest when I’m playing and recording. I am going down with my boots on.