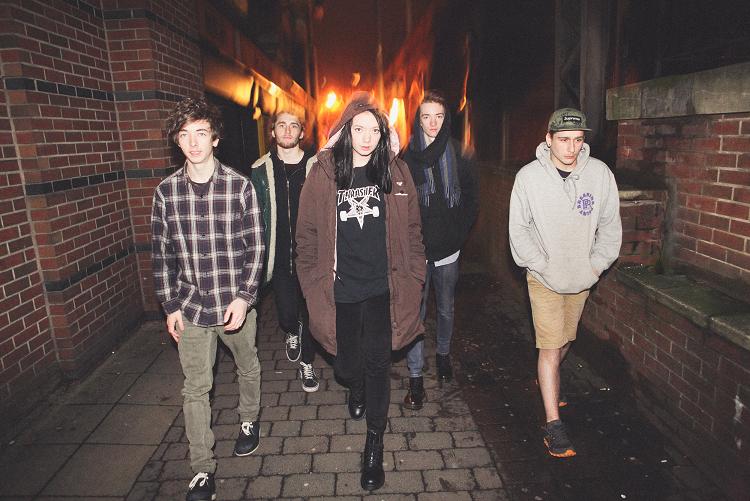 Currently amidst their UK tour with Feed The Rhino, we managed to catch up with Becca & Sam Macintyre from the mighty Marmozets to have a natter about their time on the road and their incredible journey so far as a band.

For anybody reading this who may be coming across you for the first time, describe Marmozets in three words.
Becca: Describe the band in three words…
Sam: BEEF
Becca: Beef, Circus and Beer!

Any particular reason for those choices?
Becca: Circus for the madness because we look like a circus act on stage; somebody told us last night when we played London that we looked like a circus. Beef is for the beefyness in the sound, it’s quite juicy and beefy init and then beer, because we just generally like beer!

You’re currently on tour with Feed The Rhino; what’s been the highlight so far?
Becca: Last night when we played in London at The Borderline, it was friggin’ awesome shit went down! It sold out as well.
Sam: For me it’s definitely got to be finding that new song that I’ve been playing today; by George Michael.
Becca: [begins to sing the tune to Careless Whisper]
Sam: For me though it’s definitely got to be one of the highlights it’s such a good song!

You’ve previously toured with the likes of Hyro Da Hero and Young Guns, do you find it difficult being cramped in a tour van day in day out or have you adjusted to it and found ways to keep yourselves occupied?
Becca: This time last year was our first tour which was the Hyro one; it was all new and we didn’t know how it was going to be and journeys kind of seemed like ‘argh when are we going to get there?’ But now it’s like the journeys just fly by, they go so fast and we love it, we always have a laugh in the van. We’re always saying random stupid stuff, especially out of the windows; but yeah it’s good we love being in the van it’s what we want to do!

Marmozets are renowned for energetic live performances, has that been adopted naturally from the adrenaline you get on stage or is it practised?
Becca: Yeah, we thrive off the music we portray and play and we’re all nutters anyway so it’s kind of a release for us, even though we are still a bit crazy during the day; but it’s more of a release for me personally and I think it’s the same for the boys. We just go out there and go skits!

Moving on from live performance, you’re in the process of writing some new material; with your music being so technical what does the writing process involve?
Sam: Someone will just bring an idea to the table; literally everybody in the band has got a really good imagination and everybody brings a different and unique aspect.
Becca: Yeah we don’t have just one person, who comes in and says ‘right, this is what we’re all playing,’ we all bring something at different times.
Sam: Yeah everyone’s really unique and brings their own aspect.
Becca: And from the sound we’ve achieved so far, I think it’s because we listen to so many different styles of music and we all bring the things we’re influenced by and put it all together to create the Marmozets sound that we have today.

In terms of the new tracks that you’ve been writing, have you noticed a progression in your style compared to your older material?
Becca: We’ve felt we’ve gone back to older EPs, but it’s more matured obviously because we’ve gotten a bit older so we feel like our music has matured a lot more and we’re really happy with the sound that we’re writing at the moment. We’re actually playing one of the new songs tonight [as part of the Feed The Rhino tour] which is “Broken Reflection.”

You’ve said you’ve matured in your sound but what can we expect from the new record?
Becca: Well it’s going to be an album; we might bring out one single before the album comes out. It’s still got its time signatures but it’s a lot calmer and there’s a lot more structure to the songs; we’re keeping the more classic rock choruses and poppy verses with build ups.

For a band so young you’ve achieved so much already; but what would you say is your proudest moment so far?
Becca: I think it’s different for all of us; my proudest moment was 2012 altogether from day one when we went on our tour with Hyro Da Hero, having a mad festival season, bringing out “Good Days” and doing our first music video, getting all of the response we got from fans you know, and other people in the industry; just having a great team behind us who have been pushing us. The whole year was pretty mental!
Sam: Even the year before that…
Becca: Yeah but this has been the main year: it was just a good year altogether there were no ups and downs it was just straight up all the way.
Sam: For me it was 2011.
Becca: Yeah that was when we got our management so that was a good year as well but I mean generally for the band and getting out on the road and doing shows I think it was 2012.
Sam: Agree to disagree!
Becca: You’ve got it tattooed haven’t you, MMXI.
Sam: Yeah I have!

In terms of your fan base, you refer to them as your ‘Wolfpack,’ where did the idea come from?
Becca: We have a song called “Onemanwolfpack” and it takes me back to you know the film “The Hangover” and they’re on top of the building and what’s the character called [laughs] shit what’s his name, the kind of crazy hobo looking one? I can’t remember his name! Anyway he talks about the Wolfpack and I kind of feel like that because I’m the only girl in the band, so that’s where it came from really.

You’re playing Radstock Festival in March and you’ve also announced that you’re playing with Enter Shikari later in the year in Liverpool; what other plans do you have for the year?
Becca: Not too sure. We’d like to do Europe, because obviously last year we did the festival season and normally you take one year out after you’ve done that and then you go back the following year. So this year is just getting the album out, trying to get out on as many tours as possible and just keep writing; maybe break Europe!

Any final words from you guys?
Becca: Peace Out!
Sam: Hold on two seconds…just wait…
Becca: Any second…
Sam: Wait for it to load…ALAN, that’s his name [from The Hangover]
Becca: Yeah! Alan we love you.
Sam: [plays George Michael’s Careless Whisper on his phone].