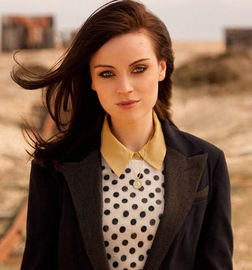 Amy Macdonald has sold over 4.5 million albums worldwide and has played to over 1 million fans over the last few years. Her phenomenally successful debut This Is The Life charted at #1 in 5 countries and her second album A Curious Thing hit the Top 10 in 10 countries across Europe. Armed with a superb collection of songs from her equally well received third album Life In A Beautiful Light Amy embarks on a UK and European tour this week. Glasswerk chats to the remarkably down to earth songstress about playing live, writing songs and burning rubber on the Top Gear track!

Are you looking forward to heading out on tour next week?

I am yes. My band and I fly to Switzerland on Friday and the first show is on Saturday. We always have a great time when we’re on tour. I think all the gigs are sold out or very close to being sold out so yeah I’m very excited to get out and perform again.

You’ve obviously done a great deal of touring all over the world. What’s the difference between playing a massive open air festival or a smaller gig in a more intimate setting?

With a big open air festival people aren’t necessarily there to see you. So it’s a bit harder and you might have to win people over. But it’s a good challenge. Whereas at a smaller more intimate gig people are there to see you, so you don’t have to work as hard. But I love doing both.

Do you have a favourite venue to play one that you like going back to?

You mention Glasgow there, there’s a fantastic song on Life In A Beautiful Light (The Green And The Blue) about the city, particularly the football rivalry. Do you think it’s important to stay true to your roots?

Yeah, I mean I don’t write songs on purpose and say ‘I’m going to write about this’. I just wait until I’m inspired. I still live in Glasgow, all my friends are from Glasgow. That’s where I’ve grown up and there’s a lot of inspiring things about the city from my point of view.
In terms of that song I was just thinking about home, about Glasgow and all the things that make it unique and that song just kind of came to me. I don’t purposefully try to stay true to my roots but I think that’s just the kind of person that I am. It just happens naturally.

You played at the Ballon D’or last month. What was that like?

Yeah I did. It was absolutely brilliant. I’m a huge football fan as are all of my band. So for us it was just totally exiting to be there and it was very strange singing and looking out at the audience and seeing people like Messi, Ronaldo, Sepp Blatter and all of these people from the world of football. Luckily enough I was able to say hello to Messi, but I’m not sure how much of that he understood! That was an amazing night.

Do you think guitar music is making a bit of a comeback at the moment. With people like Jake Bugg and Mumford and Sons having a lot of success?

I hope it is. Because its what I like listening to. It’s really nice seeing people that work hard and do things all off their own back. It makes me happy when people like that are successful. People like Jake Bugg and Mumford and Sons, they write these songs and they’re coming from the heart and it actually means something to them. So for me its great when people like this get success.

One of our favourite songs on Life In A Beautiful Light is called Human Spirit. Can you tell us a little bit about the inspiration for that song?

The inspiration came a few years ago actually when the Chilean miners were trapped. It was such an incredible news story that everyone seemed to be hooked on it, and for me I’m such an emotional person that when I watched them rescue every single one of them it just moved me to tears. When I feel like that, when I get emotional I always feel inspired so I wrote the song Human Spirit after that.

A while back you collaborated with Ray Davies on the song Dead End Street. He writes a lot of songs with a story behind them. Do you feel that you write in a similar way, from the point of view of an observer, rather than writing autobiographical songs?

I have written some songs about myself but I think it’s good being an observer, you do take a lot of things in. I like writing songs that have got a story behind them and I like listening to songs like that as well. So I think that’s probably where it comes from.

Is there anyone else you would like to collaborate with in the future?

I mean there’s loads of people, like you mentioned earlier Mumford and Sons I think they’re great. There’s so many great artists out there at the moment. But my ultimate favourite is Bruce Springsteen. I’m a massive fan, I just love all of his work and I really look up to him.

Yeah of course you played on the same bill as Bruce at Hard Rock Calling last year didn’t you, was it nerve racking?

It wasn’t nerve racking. It’s was exciting more than anything especially because I knew that the majority of people I was playing to were Bruce Springsteen fans so I felt that I was with my own. I was very lucky that I got to meet him that day as well. He was just so lovely, so down to earth, which made me love him even more!

You did the ‘Star in a reasonably priced car’ lap on Top Gear recently, what was that like?

(Laughs) I absolutely loved it yeah, it was one of the best things I’ve been able to do. I’m a massive car fanatic and I’ve always loved Top Gear. Its always been one of my favourite shows so it was pretty much a dream come true for me to go on there. I got on so well with everyone and I just had an absolute blast.

Brilliant, is it a long day or do they just keep you there for a short time?

Well I was there for about six hours! So yeah I was part of it all I took in the whole experience!

There a series of programs on at the moment celebrating the golden age of the album. Is it important to you that albums be seen as a whole. As a full piece of work rather than just individual tracks?

Yes and no. I think it’s nice that an album flows and seems like a collection of work but sometimes it’s good to have a bit of a mixture on an album. I just love music so if I love an album I’ll play it to death. But there’s some records where I might only like a couple of songs so I might just play them. But I think that’s fine, I think its OK to chop and change.

Amy Macdonald begins her UK and European tour on Saturday. Head over to link for more information.