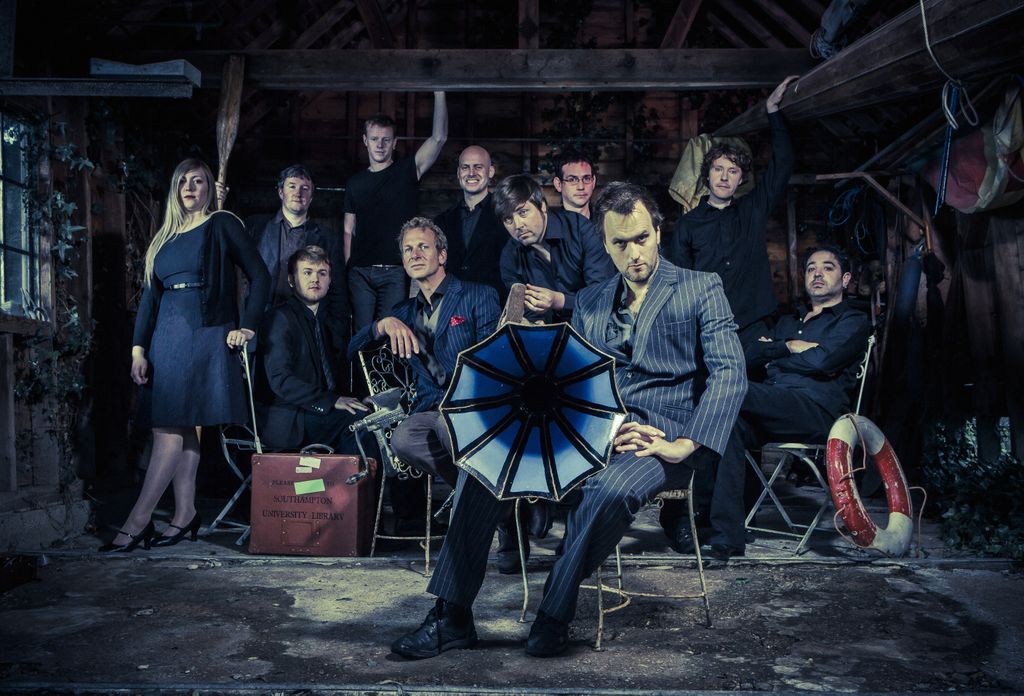 As they release the latest video for new single Roll The Woodpile down, we caught up with nu-folk revivalists Bellowhead and their drummer Pete Flood (second from right) to chat about their whirlwind year which saw them scooping up awards left, right and centre for their latest album, the critically acclaimed “Broadside”.

Hello Pete, where do we find you today and what are you up to?

As a band used to decimating the folk awards, what does the incredible support you’ve received mean to you as recording artists?

Well, it means that we can carry on doing what we love, so it’s incredibly important. Not that it’s an importantly important distinction, but we tend to see ourselves as live artists primarily – it’s when we’re onstage that we’re a community and a collective.

From a fans point of view, Broadside felt like a much more sculpted and considered release to previous efforts. Was that the aim?

Yes. Our previous albums had all been a process of trying to capture our live sound in the studio. Hedonism, the last one of these, felt like it was as good as it was going to get – recorded in one room in Abbey Road with minimal overdubs, but with a really exacting rehearsal process so that we really knew what to do when we got there. So when we came to think about Broadside, we started with the premise of building the sound from the ground up – starting with rhythm section, then adding strings, brass, etc. It’s what everyone else does, but because it took us four albums to try it as a working method, which incidentally meant we had a bank of ideas for arrangements that could only work that way.

When you’re writing do you find yourself consciously thinking about how the material will translate live? It often feels like there are lulls and instrumental sections to give the performance room to breathe.

Yes – although, maybe not in that way – most band members would tell you that the demand are fairly incessant – we’re not great at building downtime into our sets. But we do try to ramp up the tension in the dance tunes, to build up to a big climax. We also bear in mind how things will look on stage. Black Beetle Pies for instance requires band member to pick up instruments that the audience wouldn’t normally associate with them – Sam’s on drums and I’m out front banging a xylophone – so yes, the live show plays a large part in the way we think about developing new material.

The album has the feel of a score or soundtrack to it, would that be something you’d look at branching out into in future?

Definitely, if any offers came in.

You’re keen on covering folk classics and sea shanties such as the rousing new single Roll The Woodpile Down, how do you go about whittling down the choices?

We have to leave that process to our producer – otherwise we’d all end up falling out over it. Well, we do anyway, but there’d be full fisticuffs if we tried to decide which tracks to record all by ourselves.

You’ve been largely credited with restoring a bit of cool back to the folk scene and bridging the age gap (I can attest to this as a 27 year old man who attended your last show with his 57 year old parents and left feeling a strange mixture of shame and elation) – do you feel like there’s a unifying aspect to your music and performances?

Yes. People talk a lot about the death of protest song, and how it’s indicative of a general lack of engagement with the important issues. I agree to an extent, but what I think is perhaps more important as primary step is to bring people together in enjoyment of our common humanity. Maybe that sounds trite, but it’s never been so easy to be a shut in as it is in this time of internet and home deliveries, and I think we are, in our own way, flying the flag for community. And it’s great that that seems to attract people of all ages – now we just have to do some work on expanding the cultural diversity of our audience!

Where does a lot of the inspiration from your original material come from, notably the gruesome and strange tale of Black Beetle Pies?

Many of the gruesome ones come from the Bodleian collection of broadsides, which is online and browsable, and a complete treasure trove. They take a bit more work in the arranging, as many lack tunes, and the prose can be purple. Those things tend to make some folk musicians a little sniffy – there’s this weird idea that the only worthwhile songs are those that made it into the oral tradition – it’s kind of the traddy equivalent of people who sneer at anything that isn’t top 40. I think it’s a bit of an irrelevance given that the ‘real’ folk culture of people singing in pub for beer and the enjoyment of a small circle of locals went into decline over a century ago, and that what we do now – the folk ‘scene’ – is just another niche grouping of professional musicians. We’re into reimagining the past, not reenacting it – so those songs work well for us.

What can we expect from your next release musically? A concept album perhaps?

We’re talking about a release comprised entirely of pianola rolls. Now that Beck’s broken the mould in terms of format, we feel obliged to carry on his good work.

If you could put together a side project, what genre would you play, what would you be called, and who in an ideal world would be in the band?

We have enough side projects already, but I’d like to be in an electronic trio playing baroque grime skronk.

What’s your favourite country to play and why?

The Canadian festival scene is really lovely and welcoming, but I also love to be in a really exotic culture – it’d be great to take the band to Japan, or India perhaps.

Who should we be watching out for on the UK folk scene, any favourites?

Solarference – a really interesting duo who do laptop folk improv – it sounds like it’d be a car crash but it really works.

How do you find touring as such a large group of musicians? Any pet hates or squabbles on the bus?

Yes – when people pee standing up in the bus toilet as it’s going along a bumpy track then leave someone else to negotiate the mess when they’ve just nipped out for a slash at 4am. Also, Squeezy – our melodeon player – brings some terribly antisocial foodstuffs on board. Yesterday he was snacking on fish fluff – whatever that is.