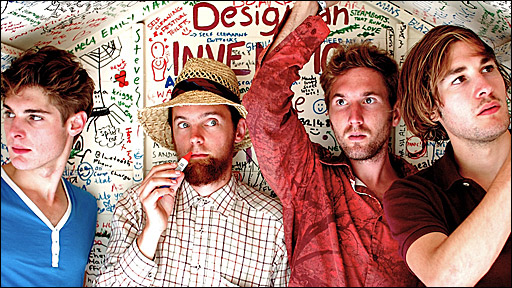 Q: The new album sounds even more mature than the last, stories about life’s bigger issues. Though Beachcombers’s Windowsill was deep and somewhat thoughtful, the new record seems to delve into even bigger issues of death, marriage and birth – are these from personal experience?

Tales From Terra Firma are the stories we imagine a human might want to tell after spending some time on earth. Experiences that most of us go through at least once, which leave a big impression and shape the way we think about life. The events of the album are all true and were experienced by us, individually or together as a group. But it’s always hard to put the emotions they create into words at the time, so most of the words were written in a stationary camper van in a back yard in Oxford on returning home from our tours in 2010.

Q: As well as lyrically, TfTF’s production seems to be tighter and instrumentally more composed. How have you managed to keep the ragged self-made charm that enticed so many with BW?
We made this album with just a few extra bits of equipment & resources than last time. We built a soundproof shed on a hilltop in East Oxford and filled it with outlandish instruments – e.g. the qanun from Knock Me On The Head and mbira from Hook Line Sinker. The vocals were done on the same mic we used previously for Zorbing, Watching Birds, On The Rocks, and we also visited some old familiar Oxford locations: St Michael’s at the North Gate (oldest building in the city) and the East Oxford Community Centre. Making music at your home allows you the time and space to focus, and assemble detailed arrangements that reflect the words honestly through music.

Q: Why did you choose Knock Me On The Head as the lead single from the album?
It showcases the album’s schizoid emotional content quite well, and features a range of different instruments too: qanun from Turkey, spoons from Bavaria, and we like to think it has a facet of Americana in the style of Wilco… my favourite track is “I Might”. The poem by Coleridge that inspires some of the lyrics also supplied the ideas for our video, online the next couple of days.

Q: The last few years have seen a folk revival in the mainstream, do you think your more authentic style fits into this genre, and do you want to be a part of the genre? One that is often sniffed at for its many ‘faux-folk’ outfits.
We are big fans of the book “Electric Eden” by Rob Young, which names many of our favourite old English folk artists. We take huge inspiration from Vashti Bunyan, Richard & Linda Thompson, Pentangle, The Incredible String Band… and any association with them is really welcome – we’re honoured to be compared to them. Some purists might find us quite un-folky since most of our lyrical content is based on personal experience, and not shared traditional stories… although they’re songs that we hope could be shared (e.g. they’re about our personal memory of communal universal experiences like marriage, birth and death). We like the idea that our music could be called Folk even though it bends the purist rules like this, in changing the subject material and instrumentation while retaining a folk sensibility. Rather than take the Folk template and change our music to fit it and the wave of Folk revival artists, we’d prefer to make music in our own style and if it happens to share some aspects with other artists then that’s great. Our new favoured description would include the word “Soul” since what we’re aiming for is a soulful honest telling of our shared human experiences. Garage soul?

Q: I read once that you were sceptical over signing with 4AD or any label for that matter, why was this?
Every band dreams of making it alone without needing support from established institutions – it’s the way you develop your songs personally at first, without outside help… But 4AD is the best home we could have imagined – they really foster their artists and have a great roster of talented people. We shared the Laneways Australia bill in 2011 with some of our favourites. It’s great to make our music part of a bigger family.

Q: More generally now, what are your plans for the year, anything after the forthcoming tour?
We will tour as much as we can – it’s all we want to do!

Q: What has been your favourite gig/venue that you have played to date? And what would be your dream gig? (Sunset slot at Glasto?!)
Oxford Town Hall 2nd day was the most fun we can remember in recent times. We played to old friends in a building we’d never had much experience with. Got to use a fancy old organ with all the stops pulled out!

Q: Who are your musical influences, both from the past and present?
Folk musicians mentioned above… plus Anne Briggs, Tom Waits, Rolf Harris.