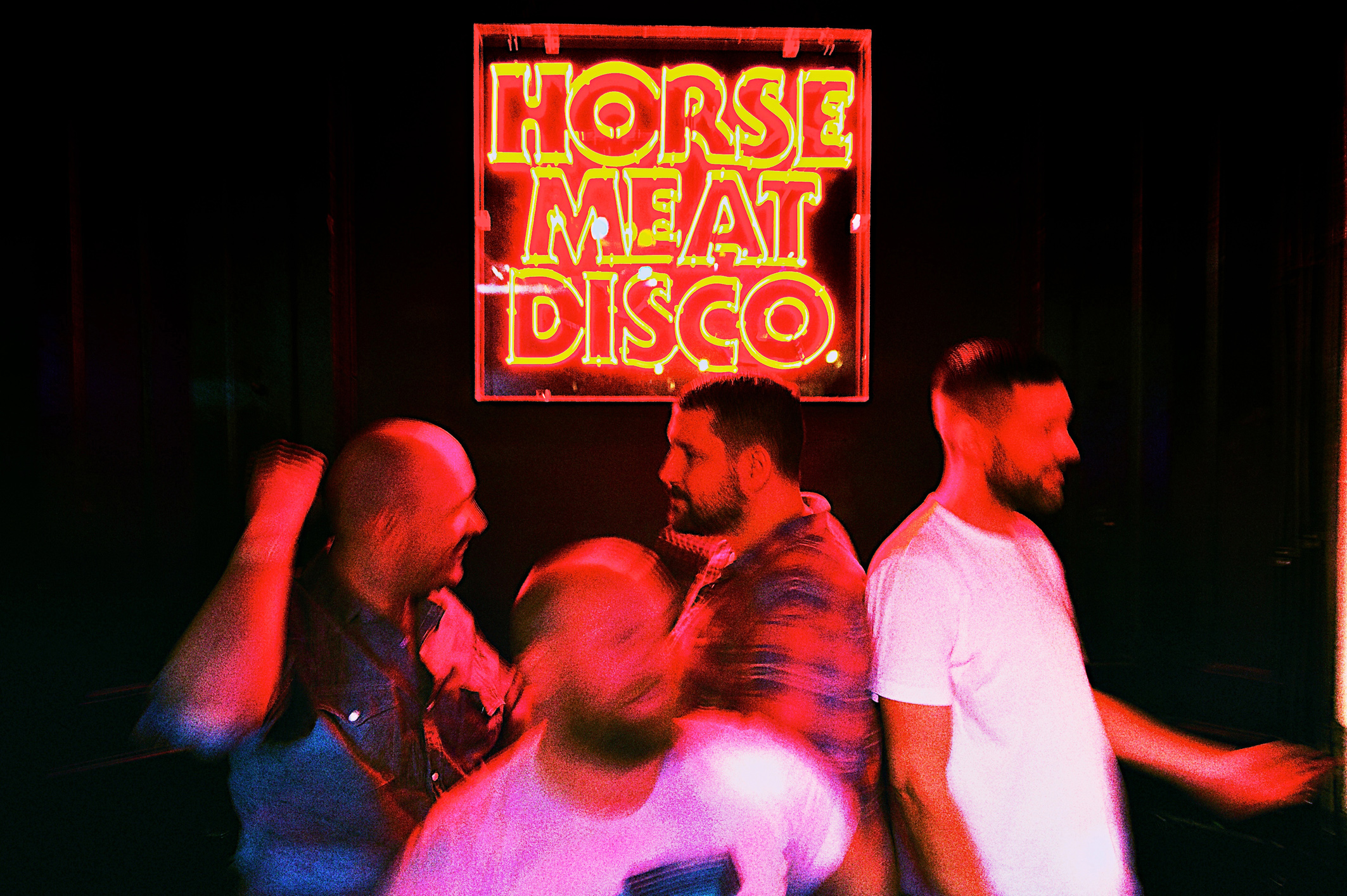 Acclaimed London DJ collective Horse Meat Disco, now into their eighth year, have continued to lead the way with packed residencies at their HQ at The Eagle in London’s Vauxhall, Lux in Lisbon and with the Tape organisation in Berlin amongst others. Inspired by the music and inclusive ethos of New York’s club scene during the ‘70s and ‘80s, the collective have garnered a unique reputation for amazing parties and unmatchable sets, the quartet of DJs each mixing their own individual quality blend of disco juice with all manner of dancefloor fillers: be it punk funk, italo, house, electric bangers or plain old oddities! They play in Leeds at underground cavern Distrikt on March 16th and we catch up with the topically entitled group ahead of the party.

So the horsemeat scandal – good for you or are you bored of people coming to you with the same gags?
It’s funny that it was 10 years ago that a similar story surfaced where we originally got our name from. The obscured headline in a newspaper at the time read ‘Horse meat discovered in salami’ but there wasn’t nearly the same response as the latest scandal. When the story broke it was pretty insane we got lots of tweets and posts not only from people who know us but also from animal rights groups too. Thankfully the scandal hasn’t had any safety fears associated with it so its all been pretty much light hearted and fun banter. Kind of why the name horse meat disco sounded so fun in the first place.

You have residencies around the world – how different are the crowds and reactions do you think?
We have residencies in Berlin, New York, Paris (first party starts on the 1st March) and of course London. Gosh it sounds like some kind of high street fashion brand when i put it like that. They are all great parties, all slightly different in terms of crowds but always fun. We started the club in the first place to strive to have a diverse as possible following and it seems that our parties around the world reflect that.

Do you play much differently at each, or do you just do your own thang?
We just do our own thing. There is no point trying to tailor the music to suit a particular city. Music is universal after all so we just play the music that the clubs booked us for in the first place. Of course if I can dig up some record that references the city etc then i’ll always try and drop one in… although 99% of times the crowd are oblivious to it… for various reasons!

Have you finished any original productions yet, or are they still in the pipeline?
We’re working on an album at the moment, it’s taking some time to get it right especially when getting us all together at any one time can be problematic but we hope to get something out soon. We’ve put out some edits in the past but we’re much more excited about making our own music and bringing together all our influences.

Would they be the sorts of things people might expect or do you write different to what you play?
I think you’d pretty much the kind of music we are making. It reflects all our tastes and influences. From obviously disco to house, soul, r&b, slow jams and morning music and there may well be a few surprises too.

You run a secret edit series, secret presumably because of the shady legality – where do you sit with sampling and edits and the like – is there a limit to what is fair to get away with without permission from original artists or?
Well they’re not that secret as it has our names on it!

What are some of the favourite bits of wax in your collection and why?
That all depends on my mood. Sometimes it can be something random like a pop album, or some jazz fusion thing or some high energy if the moment calls for it but I guess I’m like any proud mother… I love all my children equally!

What should people expect from you in Leeds when you play there soon?
Great music, fun times and some gay abandon!

What else do you like to do away from music?
Some of the gang have started playing Badminton and we all love to cook so its all a bit WI really!