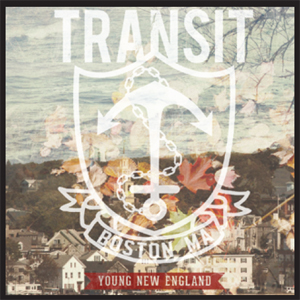 According to guitarist Tim Landers, ‘Young New England’ is a sonic statement of intent – this is who Transit are. The five-piece’s unique brand of emo-tinged pop-punk has undergone a transformation; their sound has been infused with summery, indie-folk-rock sensibilities. The harmonies are tight, the lead lines awe-inspiring; the band have polished up their sound, and it’s a breathtaking progression that makes for a collection of beautiful songs.

‘Listen & Forgive’ is an album that has never lost its ability to stir up the bittersweet tang of love and loss; it was, in essence, a break-up record, and Joe Boynton’s refreshingly frank and honest lyricism tugged at something within every heart that had ever been broken. What makes ‘Young New England’ even better than its predecessor in that respect is that it reaches out and pulls just about anyone in; the songs are diverse and equally captivating. From the almost-country twang of the title track (one just made for inebriated chanting on the way home), to the hopeful ‘Lake Q’, there’s a tune for everyone on this record.

Joe Boynton’s lyrics scream an eloquent simplicity; his one-liners are present once again in a never-ending stream, perfectly showcased on tracks such as the wistful ‘So Long, So Long’ as he sings about an end to something; ‘Low like the lights on a dim-lit street/The stars in your eyes have set me free’; his elegant phrases sit well on the lips of the listener; you can’t help but sing out.

These songs are extraordinary. ‘Young New England’ feels like a Polaroid snapshot of a record – the album captures the recklessness of youth, the relentlessness of hope and the lazy, ‘Hazy’ feel of summer bleeds through each track, as does their pride in the places they came from. The last notes of ‘Lake Q’ fade out, and I find I have a grin on my face, goose-bumps all the way up my arms and a longing to visit Massachusetts. I guess I’ll have to just settle for seeing Transit live, and sometime soon.