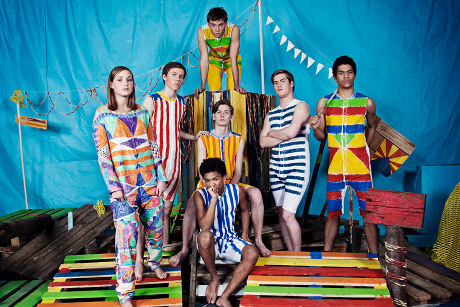 Recently, we caught up with Icelandic band ‘Retro Stefson’ ahead of their album launch gig in London’s Lexington. Unnsteinn Manuel (lead singer, guitar) and Haraldur Ari (Percussion, singer, dancer) sat down after their sound check to chat about how they met in kindergarten, to living in Berlin, upcoming music videos involving drag queens, being members of a traditional choir, studying acting and even celebrating Arthurs Day in Dublin with some very merry Irish folk! Here’s what they had to say:

So there are 7 of you in the band?
Haraldur: Well 7/8 of us in the band. I used to play with the band, but now I go to school here in England in the Central School of Speech and Drama. I play with them when I can. There’s another guy who produced our album and he plays with the band now… so 7 ½ of us.

Retro Stefson have been around since 2006. For some of our readers who don’t know who you are, can you give a bit of background as to how you met?
Haraldur: We met in Kindergarten when we were three years old (1995)
Unnsteinn: Myself and my brother Logi Pedro (also in Retro Stefson) all became best friends. We’ve been doing all sorts of stupid things together like short films.
Haraldur: Then we split up and moved to the suburbs and Unnsteinn formed another band with some friends. To make a long story very short, they entered the band in a school song contest. They didn’t win the competition but they were offered to play a youth ball in the capital, where you can meet every young teenager from Iceland. The band has been growing ever since. Some members have been added and some founded the group.

‘Retro Stefson’ is your third album. Did you approach it differently to your first two albums? Was there a different mentality going in – different sounds?
Unnsteinn: Definitely, the first album we kind of hijacked into the studio. For the second album we recorded, mixed and mastered everything in one month. This album has been back and forth going to different studios. The other album was done in one studio, whereas this was done everywhere from home studios to on the road.

Sounds like a very lengthy process so one that was worth it in the end. Your previous two albums were sung through Icelandic, Portuguese and English whereas this album is all sung through English. Was that deliberate in a way to appeal to a wider audience?
Unnsteinn: No, I’ll be 23 this summer and with the first album you don’t really know much about life. Then time passes and a lot happens.
Haraldur: You’re becoming more emotional.
Unnsteinn: Yes you become more emotional and you get to know more of life. The easiest way at the time was to write through English. I could have written it in Icelandic. I wanted to do a double album, but my boss said it wasn’t cool. I’ll definitely do that in the future.

Throughout the album, there are elements of electro, afro-pop, funk and rock. Who were your influences growing up that contributed to this eclectic style?
Unnsteinn: I’m not sure if it was the influences we listened to growing up, but more so the ones that came later. I started teaching when I was 18 but to go to clubs back home you have to be 20 years old which is quite old. We were also influenced from more underground and dance music and you can hear a lot of these sounds on the album. There’s a song called ‘True’ on the album. It’s very German sounding and I wrote it when I was living in Berlin.
Haraldur: We were also in a choir for 3-4 years; quite a traditional choir and we even played in Notre Dame. So it’s quite difficult to answer what influenced us because there are so many things and we’d need to go through our life story.

Retro Stefson was released in October in Iceland. I believe you were very successful at the recent Icelandic Music Awards and won Best Song, Best Video, Best Performance and nominated for Nordic Music Prize. How did it feel to be so well received back home?
Unnsteinn: We’ve been nominated so many times and we always show up and everyone just gets really pissed except us because we were never old enough. We never won anything. I’m not a good loser. (laughs)
Haraldur: We hate losing.
Unnsteinn: It’s nice to get the recognition though. Last year we didn’t show up for the awards, even though we were nominated. We sent our Moms instead. We got an Export Award, because we work so much abroad and we wanted to send our Moms in stewardess costumes but they didn’t allow it. (laughs)

So the lead single from the album is ‘Glow’. It’s getting a lot of airplay over here especially on Radio 1.
Unnsteinn: I’m not too sure, I think so. In Iceland, ‘Qween’ was the first single. At home they want to play all the songs at the same time. But we’re very lucky we can choose the songs and radio stations. ‘Glow’ was one of the first hits back home and it helped having the music video. Now we’re making two new music videos for ‘She Said’ and ‘Qween’. For ‘She Said’ we’re going to be filming as drag queens – but we can’t say more, it’s a secret.
Haraldur: We’re doing the videos more so for ourselves than for the audience. We love being on set shooting the videos.
Unnsteinn: We’re not really into this music thing, Haraldur is studying acting, I’m studying film making.

So it’s like a side project that you just happen to be good at?
Haraldur: Yeah it’s like a hobby.

I heard that Of Monsters and Men said you’re the most exciting live band around. That’s extremely high praise.
Haraldur: Same to them

What kind of artists are you listening to and that you’d recommend?
Haraldur: I change every week.
Unnsteinn: I’m so stupid, I’ll start listening to someone and the day after it turns out they’re from some huge major record and everyone knows about it but me. Like this girl Laura Mvula. I checked her out online and she has like 40K fans, so I’m not really recommending her to anyone because everyone knows her. So that’s what I’ve been listening to the past few weeks.
Haraldur: I was listening to a lot of Russian music, but then I listened to the Retro Stefson album again to remind myself.

You have to remind yourself of your own songs?
Haraldur: Yes definitely because we play our songs a lot so they start to fade away from the original.
Unnsteinn: I would recommend one band called Sisyey. They’re three sisters who create great house songs. Check out the track ‘Aint got nobody’. You’ll love it instantly! It was released in a real unorthodox way back home. First it’s sent to DJ’s, so only people in the clubs heard it. That’s been going on for about a year. Now it’s being released to the radio so it’s getting a lot more recognition.

Great, thank you for the tip! So you’re here in London tonight, Brighton 26th and then Switzerland, Germany and France to name but a few. Why is there no Ireland on that list? I’m Irish and I wanted to recommend you to all my friends – don’t worry I still will.
Unnsteinn: Oh Sorry. I’m not sure how the tour venues works, but I played in Belfast before and I played at some Guinness Day.

Oh Arthurs day!
Yes Arthurs Day. It was crazy! Everyone was so happy and hugging me. I had to pay €5 for a pint. All kind of stars were flown in, like Brandon Flowers. We were probably the least known band. I also played in Northern Ireland. I liked it a lot. In a way, it was very similar to Iceland – whether it’s the look or the people.

Ok, so last Q’s. Do you have a favourite song on the album or if you can’t pick one, what’s your favourite song to perform?
Haraldur: At the moment we love ‘Fall’. It changes though when you play certain songs for a long time and then you chose your next favourite.
Unnsteinn: ‘Fall’ has been my favourite song for the past two weeks and we played it at the Icelandic Music Awards. I’m looking forward to having my next favourite song.

Well thanks very much for your time guys. Best of luck with the gig tonight and enjoy the rest of your tour.