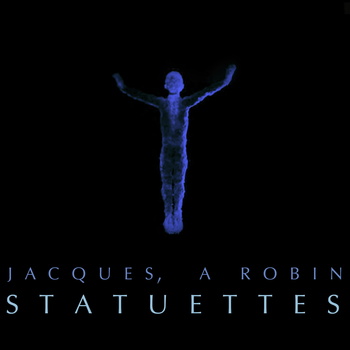 Italian-born David Ariass, has released his debut album ‘Statuettes’ under the guise Jacques, A Robin. The 7 track chamber-folk album showcases his fresh and unique sound with his rich baritone vocals and captivating storytelling ability.

‘Statuettes’ is firmly supported by a wide variety of instruments including strings, brass and percussion, creating a truly textural piece of music. Opening the album with ‘The Marble Boy’, Jacques rich and striking baritone vocals take centre stage, while the delicate piano and guitar offer subtle accompaniment. His melancholic tone is dark and mysterious as we’re presented with a story of obsession. ‘Butterfly On The Wall’ has a classical baroque feel about it with its use of strings and woodwind while ‘Josephine And The Lantern’ is a dreamy track with echoing vocals, accompanied by delicate piano and strings. ‘The Witch’s Son’ is a song of two parts. It opens with a melodic running piano line which is mirrored by the lyrics “Running In the fields”, but then gradually develops into a dark mysterious track, once again highlighting his warm baritone vocals. Many have compared Jacques to Scott Walker, an American-British singer renowned for his rich baritone voice.

‘Statuettes’ is a highly thematic album focusing on themes of love, loss, hope and heartbreak. This is further brought to life in Jacques fascinating storytelling ability. ‘Her Belly Scar’ depicts the tale of a transgendered woman and the memory of her mother and birth. The lullaby style song offers minimal accompaniment and soothing vocals, later building to a melodic melody. ‘Cathedrals In The Sun’ narrates tales of childhood, friendship and the painful memories of war, while ‘My Spectral Summer’ depicts the tragic death of a family member. This is all brought together with his vivid poetic lyrics throughout “Holding back the stars she left in my eyes/as the images unwound on past life’s surprises” and “Like her, the light is thrown into infinity/Joesphines will eclipsed by the clouds of sleep/Laid aside like a dress upon a chair.” – A poetic quality that makes quite the impact.

On first listen, Jacques A Robin’s monotonous vibe might be slightly overwhelming. However, look a little deeper to discover a truly layered album with just the right amount of light and shade and one that offers more with each listen. Statuettes’ was produced at Bristol’s Robot Club with Stew Jackson (Phantom Limb, Massive Attack), and is available for release May 6th, 2013.

For further information you can visit: [link]