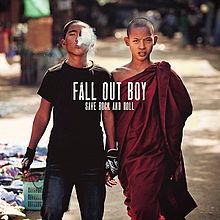 Fall Out Boy – Save Rock And Roll

The band are back from their hiatus, and that break seems to have done them a world of good. Fresh from their respective side projects, Save Rock And Roll is laden with positivity. It is an enthralling effort from an already enthralling band. Musically, it is very different from their pop-punk origins, moving to a slightly more radio-friendly landscape, but never losing what makes all eleven tracks so evidently FOB. Memorable lyrics, catchy choruses, recurring themes and obvious inspirations.

Opening track The Phoenix is the perfect opener, grabbing the listener instantly with Patrick Stump roaring the brash ‘Put on your warpaint!’. His vocals have never been better, sounding so much more confident than we have ever heard. This is evident throughout the album, which culminates with him and Elton John dueting, but more on that later. ‘The Phoenix’ contains vocals almost condemns those who are trying to replace FOB, ‘Wear your vintage Misery? / No, I think it looked a little better on me’ is an obvious nod, while during the breakdown we can faintly hear gang vocals shouting ‘Bring the boys back!’ in the distance. The boys are definitely here to save rock and roll, whether it needs saving or not.

This is followed by their first released track My Songs Know What You Did In The Dark (Light Em Up), which showed fans the direction the band would be taking with this record, which is the case throughout. You won’t hear guitars and drums in the traditional FOB sense, but you will hear them. But there are Pete Wentz’s unmistakable lyrics, with biting cynicism and dark word play. Alone Together contains the lyrics ‘This is the road to ruin / And we’re starting at the end’, while Where Did The Party Go? is a song questioning the ageing process that the band, everyone, has undergone. ‘We were the kids who screamed ‘We weren’t the same!’ in sweaty rooms / Now we’re doomed to organizing walk-in closets like tombs’.

The album has it’s fair share of guest vocalists too to lend a hand. British act Foxes lends her voice to Just One Yesterday, a track similar in sound and sonic to Rolling In the Deep, while Big Sean gets to say ‘Oh God’ on yet another track in the form of The Mighty Fall. That is probably the weakest of the four guests. We also see Courtney Love wailing on Rat A Tat, a quick punk track which is probably closest to anything FOB have released before. A very quick entry from Joe Trohman and Stump on guitar, before Wentz holds his own with a walking bass line under Stump’s vocals. It should also be noted that the other members of the band are performing backing vocals more than ever before – one band.

And finally we have Elton John on the title track. But more on that later.

Miss Missing You sees the guys back without guests, proving that they don’t need a helping hand. It is also one of the many songs to mention burning flames, a recurring theme throughout this record. It is followed by one of the most exciting songs on the record is Death Valley, which has single and radio play written all over it. A really big track, with Andy Hurley heavy on the drums during the chorus and some more biting lyrics ‘Oh there you go; Undress to impress / you can wear a crown but you’re no princess’.

Young Volcanoes is a song reduced to hand claps and acoustic guitar, the slowest song to appear on the album thus far. Again sitting in radio country, it is destined not only to be played over and over again, but to be copied and covered in the company of campfires and youtube video cameras. More woeful lyrics of relationship are evident in true FOB fashion, in the line ‘Come on make it easy / say ‘I never mattered’’ Even the title of this song ventures into flame territory, asFOB have been reborn in the flames, much like their first songs’ Phoenix.

And finally is easily the strongest and most memorable song on the record, Save Rock And Roll. Elton shines as you would expect, and him and Stump sing in such fluidity together it’s scary. But this song as a whole is what grabs the listener. It’s piano-laden notes travel through you and the band’s new found maturity are found within each verse and chorus. It almost touches on previous songs with lyrics like ‘going down swinging’, but what’s even more comforting are the lyrics ‘Oh no we won’t go / Cause we don’t know when to quit’. It seems as though Fall Out Boy are content once more with being Fall Out Boy.

You may or may not remember a piece I wrote about Fall Out Boy in the week leading to their reformation//ending of hiatus//getting back together//whatever you want to call it. I stated that the band had been my favourite for almost a decade. With the release of Save Rock And Roll, i can say that this is still the case. Yes, what they have released is immeasurably different from what we’ve heard before. But, if you wanted TTTYG again, just listen to TTTYG once more. I am happy with the direction that the band are taking, which is far from a regression. Back from the ashes of disbelief, this is a band who is here to Save Rock And Roll, whether it needs to be saved or not.