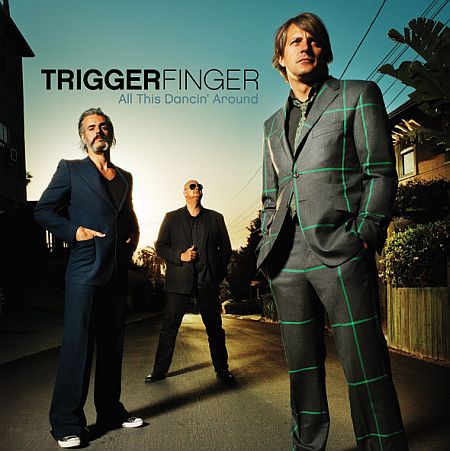 Triggerfinger – All This Dancin’ Around

All This Dancin’ Around is the third album from the band described as “the loudest band in Antwerp”. But the real surprise here is that it shows a softer side to the Belgian rockers, as well as the heavy side that would be expected from the three piece. The album was produced by Greg Gordon in the famous Sound City studio in Los Angeles, and perhaps its varied nature reflects a new phase for Triggerfinger.

The big rockers are in there of course. The title track opens the album in some style with a powerful track that rises and falls several times, perhaps a prediction of the variety that is to come. Single release Let It Ride is a huge song with a wonderful driving bass line from Monsieur Paul and a massive anthemic chorus. Cherry has a similarly fast pace and a beat that drives it forward in the midst of a droning backdrop, while both Feed Me and Tuxedo see drummer Mario Goossens displaying real dexterity.

The lengthy and emotive Baby’s Got A Gun sitting at the centre of the album is quite superb. Vocalist Ruben Block extends his voice to hit some incredible high notes and creates real dramatic tension as the song stretches to eight minutes long over a ponderous bass line. And there are other diverse tracks too, like Love Lost In Love, where Block use tremolo heavy guitar to great effect as the bass growls and the drums pound.

There is even a Ray Charles cover in here – a bluesy interpretation of All Night Long with reverb heavy vocals that is almost unrecognisable. It Hasn’t Gone Away ends the album proper with a touch of psychedelia. This is another lengthy song, coming in at just under seven minutes, but it doesn’t feel overlong as the slow vocal drawl matches the instrumental pace. There are also three bonus acoustic tracks, the best of which is a reworking of Love Lost In Love, turning a powerful track into a much softer and more emotional one.

All This Dancin’ Around is perhaps not the album I would have expected Triggerfinger to produce. But its variety and experimentation shows that there is much more to this band than its hard rocking core sound. This is an ambitious album in its scope, and they are to be credited for that. In the main it works well, at times very well, and demonstrates a considerable talent from a band that clearly works hard to develop its music.

Venue: All This Dancin’ Around
Support Band: Dramatico Entertainment