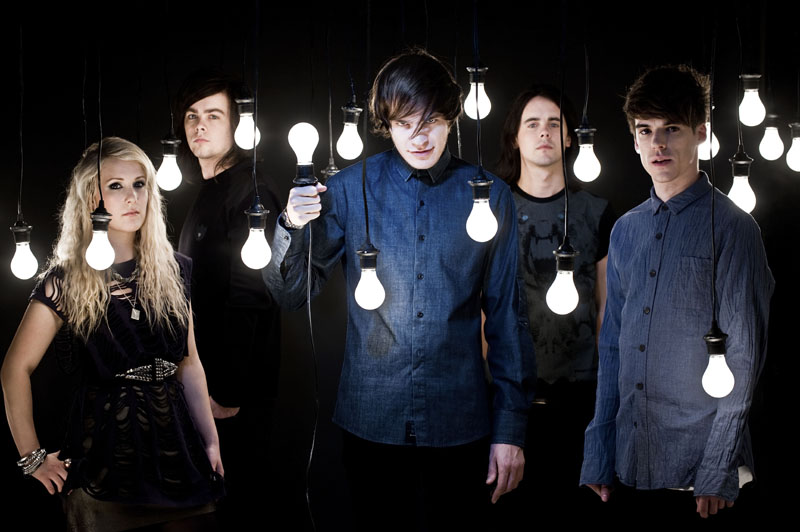 Shortly after the release of Hadouken! ‘s first album for 3 years, ‘Every Weekend’, we sent our reporter Zoe Edwards to speak to James from the band about their music, their journey and the future of Hadouken!

Hello James. Every weekend is your first album in 3 years – what have you been doing since we last heard from you?
Well we did a little bit of touring, we went to Japan, Russia, and alot of European places and festivals. We started writing the record, and then we signed a new deal so that delayed things, and beyond that we were making the record really.

How was Russia?!
That was really good. It’s a really strange place because it’s kind of like being in Europe but at the same time quite alien. The people are really nice and there’s loads of cheap vodka! The shows were great and we got well looked after so we enjoyed it!

How was the writing and recording process compared to your other records? Is anything different?
Slightly different, we wrote a lot of the songs straight up from a piano or a guitar so they were quite simplified, so that just meant that the song had a much stronger presence in the whole process, rather than it being just about the beats or a certain synth sound or something like that. It’s more of a traditional form of writing and I think it’s got stronger results as we kind of learnt as we worked on it.

It’s less social commentary and more embracing of the kind of visceral power of music or emotions.

In the past your lyrics have offered a social commentary and talked about everyday life – what’s been the lyrical inspiration for every weekend?
It’s kind of less sort of social commentary and more embracing of the kind of visceral power of like music or emotions. I’d say that the title Every Weekend came out of a common theme that kept coming up, the kind of escapism and getting lost in the moment, and then kind of channeling any aggression or anything like that into kind of positivity. That’s the two main themes of the album really.

What about musical inspirations? There’s a MoTown sample in ‘Bad Signal’ from The Supremes…
Yeah it’s certainly an influence that was kind of given to me by my parents growing up, they were very into their motown, and that kind of fed through to my music in some ways, but in other ways they’re kind of against each other. I heard the sample and I really liked it, I liked the way it was quite dark but quite happy as well and had this nice juxtaposition. When we put it onto the beat it really worked and stuck out really.

Back in 2007, you achieved success quickly and were swept into the kind of ‘nu rave’ movement – how did you feel about that?
Yeah it was quite a whirlwind! We hadn’t had much experience in the music industry so we were just embracing it at that time and enjoying it. It was all quite fast but it was nice to be part of a little microcosm of history really.

How would you describe your sound now compared to when you started?
It think then it was kind of more in your face and energetic, but quite aimless and hyperactive. I think now it’s a little bit more focused on the dynamic and we like to explore the more euphoric side of things as well as the heavier bass side of things, so when people come and see us they can have a good time in the moshpit and also put their hands in the air and enjoy the sort of euphoria.

You’ve always managed to straddle rock and dance quite carefully, but have you swayed more one way or the other? are you more of a dance act than a rock act?
I think we really still sit in between the two, and we try and bring out the best of both worlds. So in terms of rock, we use rock music structures for songs, and we have quite rocky choruses and vocals but at the same time we have rapping and at times the beats are very dance orientated and drum and bass so we kind of bring the two together and that’s where we sit!

What impact do you feel that myspace had to your success?
That was really crazy, it was a really good time to be in a band actually. It was much easier to get signed then I think and obviously these days you have to use things like twitter, which suit indivials personalities and pop stars but not bands so much because it is a personality driven social media site. We do what we do now and we’ve got enough of a fan base so we don’t have to worry about things like that too much.

Do you think that new bands now can find success in the same way?
I’d say it’s harder but interestingly there are a lot of new things going on, so facebook are talking about launching a separate feed for all your bands and twitter are launching like a separate music site in conjunction with soundcloud, so I think that actually it could be a really good time again in the next couple of years for musicians to try and break on the internet rather than having to use major labels to kind of establish themselves.

How about the radio support you recieved? What do you think about radio’s impact on new music?
I would say it’s the single most important thing for a band, for mainstream or those looking to get into the mainstream. I mean, you can see clearly by looking at what Radio 1 plays and then looking at the chart results and it certainly is a huge correlation. But obviously it’s not the only thing, there’s the internet and Youtube’s as important as MTV was in the 80’s I think now, and so you’ve got to make sure you’ve got good content and good songs and you can get there.

Youtube’s as important as MTV was in the 80’s I think now, and so you’ve got to make sure you’ve got good content and good songs.

What about your label, surface noise records – what made you decide to self release and do you think it was the right decision?
Yeah I mean it was just something that suited us. We had the capital to do it because we’d made a bit profit from the live shows and stuff like that, and we had the backing behind it, and you get more control and bigger profits but it’s more of a risk obviously. We were willing to take that risk and I think it paid off for us. We were happy to do it and it’s quite and enjoyable way of working because you feel very much in control.

Would have gone with a major label had they signed you?
Yeah and I still would now. If the right person at the right time at the right label who had the right ideas I’d do it. I have no qualms with it and it’s not like there’s some kind of stigma attached to it or that we want to be underground. It’s just whatever works best for you and your career and in our case it was releasing it ourselves.

What about the new record deal you mentioned earlier? What’s going on with that?
Well we signed to ministry of sound and they released a couple of our singles but in the end we just decided to release the album ourselves. We had another distribution deal and they wanted to wait another year and we were sick and tired of waiting after 3 years so we put it put ourselves.

You’re going on tour in the UK in April – what can fans expect?
They can expect the usual Hadouken! party really, we want everyone to have a good time and get involved. There are usually good crowds and it’s always quite rowdy, but you can stand at the back and watch if you want or you can get involved, it’s a bit of both with us.

Your homemade Youtube montage video for ‘Levitate’ went viral globally, with 48 million views – how did that come about and who’s idea was it?
Basically Dan in the band puts together Youtube videos and he’s quite a big fan of video editing and stuff like that, so he put this viral together and we put it to one of our songs to kind of showcase our music to people that otherwise wouldn’t have had a chance to listen to the band and it’s be quite successful and had a fair few million hits and because of the changes to the rules of the american chart, we managed to get the track into the top 100 records in America off the back of it so it was definitely worth doing.

With the EDM craze in the US, has it laid the groundwork for Hadouken to crack America?!
Certainly yeah I think that’s our main objective now we’ve released the album in the UK, just to target the US and get out there, it’s just a great place. Obviously there are now a lot of people who are into music similar so we feel like there are a lot of shows that we could be playing, getting out there and getting on with it really.

What’s next for Hadouken! ?
Getting out and touring the album, going round the world and making music!