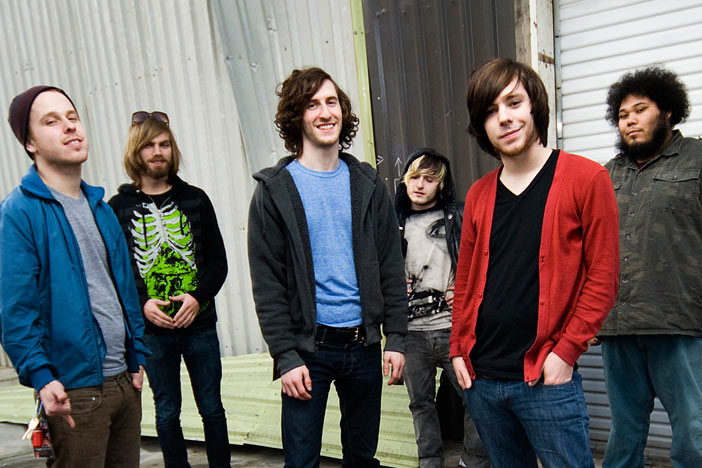 Continuing our coverage from Takedown Festival in Southampton and in the second of a series of reports from the weekend, our girl Zoe Edwards chats to Matt and Will of Dance Gavin Dance.

How are you guys? Have you just got here? Whats up?!

Matt – Well we got to the UK a week ago, and we just got to the festival a couple of hours ago.

Are you enjoying it so far despite the clouds?!

Will – You know what, I forgot a jacket so I’m freezing! But its cool.

There are loads of merch stalls, you could pick up a hoodie or something?

Get to know them, they’re good! Go and check out the smaller stages. I’d recommed Marmozets, they’re on at 4.30 I think…

Will – Haha oohh so not like my mama’s ex!

You guys are about to start a pretty big tour aren’t you?

Will – Yeah this is like the 4th show – it’s the first time we’re going to be playing a bunch of new songs from our new record so it’s like our new album debuting tour even though the album doesn’t come out for like 3 months.

And is the album all finished and good to go?

Matt – well it’s about to be mastered so…

Will – we don’t have an album cover yet to a title yet. And it’s not done being mixed or mastered so we’ve still got a little time left.

OK – any ideas for the album title?

Matt – Yeah well there’s a few…there’s like one random thing that I’ve said in my sleep and a couple of other things have popped up…we can’t decide whether to be silly or serious.

Will – It’s such a serious scene it’s quite nice to not take things too seriously.

Matt – Yeah we’re trying to find something that’s got a bit of both…a bit silly but…not..haha

Where are you looking forward to playing the most?

Matt – Yeah the pre-sale is really good already. I was really looking forward to this festival today, that was a big one. Always London!

Where’s you favourite place in the world that you’ve played?

Matt – Japan now! We just got to go a couple months ago.
Will – Australia. I had some good nights in Australia. Aside from the playing, obviously…

Speaking of which – where are the best after parties?

Matt – Oh you know what here! The ones in the UK are always pretty good! The Australian ones were awesome though!

Will – When it turns into like a dance club after you know… I don’t know how I feel about that!

Matt – The dance club ones are kind of great though. Like we did Soundwave and those parties they really want the bands to turn up so they give you tons of drinks tokens!

Will – But like I can’t even enjoy those kinds of parties sometimes because it’s like ‘oh shit look at that guy over there, oh my god there’s taking back sunday!’ you know? But cool though!

As a band, you guys have been together for quite a while – what keeps you motivated and excited about what you’re doing?

Matt – music and the fans!!
Will – I don’t know man probably break downs, because like, the more break downs I hear just the more alive i feel soo…

Hahaha that’s amazing! What do you think is the biggest challenge as a band?

Will – Yeah keeping everybody happy you know, gets tough but you know, we’ve had a pretty tumultuous time, a few member changes but we keep going on! I enjoy it, I enjoy touring. I feel like I was built for touring almost.

Will – I don’t need too much sleep and I can pretty much keep drinking all day.

Good to have those skills!

Wicked – and for young new bands, what advice would you give?

Will – Play as much beer pong as you can, you’ve got to get really good at that.

Matt – Just be creative…I don’t know, that’s always such a weird question because I’m always like I can think of all sorts of things I could tell people but words of wisdom…I don’t know! Haha

So what’s next for you guys?

Matt – We’ve got another international tour around october I think…

Is it weird being at home?!

Matt – Yeah well I was just home for about a month, and it was kind of the first time I was ever enjoying being at home, normally I get a bit stir crazy. I was excited to get back out on the road though.

Will – since most of the people who are reading this will be in the uk…I spent along of time in Atlanta recently and it made home feel like paradise! Atlanta’s a hell hole. If you’re from the UK never go to atlanta for a vacation!!

Haha excellent parting words! Thanks so much guys!