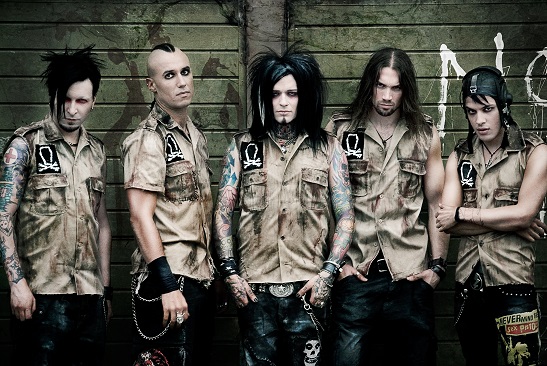 We caught up with Needles and Vincent Hyde of ‘The Defiled‘ recently on the Jagermesiter tour, where the band were playing alongside Ghost and Gojira, to talk metal, cursing, epic stadium moments and more…

So you’re on the Jaegermeister tour, it’s a sick lineup, how’s it been going for you guys?

And you’ve had local supports at all the venues, any standout bands there?

Vince: Yeah, we’ve had ‘Heights’ and tonight we have ‘Feed The Rhino’ which is pretty cool because they’re pretty fucking awesome. Am I alright to curse on this?

Swear all you want.

Vince: I wasn’t allowed on the last one and I had trouble. I don’t know about any of the other bands, I forgot they’re names but ‘Heights’ were awesome and tonight ‘Feed The Rhino’ are going to be amazing.

So recently ‘Sleeper’ came out and it’s a great track, but what else can we expect from ‘Daggers’?

Vince: And some Blues.

‘Grave Times’ did amazing things for you. Did the high expectations for ‘Daggers’ make it difficult to record?

Vince: If anything, I would say um….

Needles: I don’t think it did you know. It actually came together really really easily. It didn’t take long at all to write it and we literally went straight over and cracked on and busted it out and I think we’ve definitely improved on the first one. It’s a lot more mature, a lot more concise, and I think everyone is going to love it…. I hope.

How was working with legendary producer ‘Jason Suecof’?

Needles: Haha, it was an experience. Yeah he’s awesome and he’s got a very interesting way of working which is very new to us.

(Both Needles and Vincent are laughing).

Needles: But the result, you’ll hear it, it’s amazing so happy days.

Brixton Academy is a pretty big venue, but do you prefer these larger venues or…

Vince: It’s nice to breath and to run around and go ape shit and you can’t do that on a small stage. We’ve have all sorts of theatrical props and backdrops and it looks better on a big stage.

Any favourite places to play?

Vince: I don’t know, they’re all cool so long as they’re big.

So Needles, you’ve been in the band a little over a year, how have you been settling in?

Needles: I’m pretty settled now. Funnily enough, the show a Brixton last year was my fourth show I think. The third one was SXSW and then the fourth one was Brixton so that was nice. Now we’re bumped up the bill and I’m settling just fine thank you.

Will you be using any bin lids tonight? (Needles used to play in ‘Stomp’ before joining ‘The Defiled’

Needles: Oh, no, my bin lid and broom days are very much over.

As a band, you’ve got a great relationship with Jaegermeister, but how much of that stuff do you drink?

Vince: Yeah, we get like two bottles a night so tonight we’ll be on like twelve on this tour we’ll have had. But then also we have the Jaeger bar which is just endless so it’s a lot.

How’s been getting signed to Nuclear Blast changed things for you as a band?

Vince: It’s more organised, especially with like promoting stuff, it’s nice to have people controlling it rather than 5 dudes sitting in front of computers with their phones for hours.

So you’ve got your headline tour coming up this may. Can you tell us anything about that?

Needles: I don’t know anything about it to be honest so no.

If you could go back and play in one band, which band would you choose to be in?

Needles: I’ve already answered this before so I’m gonna go for it with the same answer and say ‘Def Leppard’. I want to be in ‘Def Leppard’ but with all of my limbs, Bosch!.

So definitely an epic stadium rock vibe then.

Vince:There you go, so long as it’s big.

Needles: And I think you could probably bring a little more to the table of performance than John Deacon as well.

Vince: Well there you go then. I’ve never thought about that before so that’s all I can think of right now so sorry.

You’ve got a reputation of partying pretty hard, do you think that’s fair?

Needles: Who told you that?

Vince: Yeah, we’ve been kicked out of a few places so I guess that’s pretty fair. That’s good enough.

So who in the band parties the hardest?

Vince: I think it all depends. One night, one dude might go completely haywire, it all depends. I think we’re all equally fucked in the head, but in different departments if that makes sense. We all drink a lot.