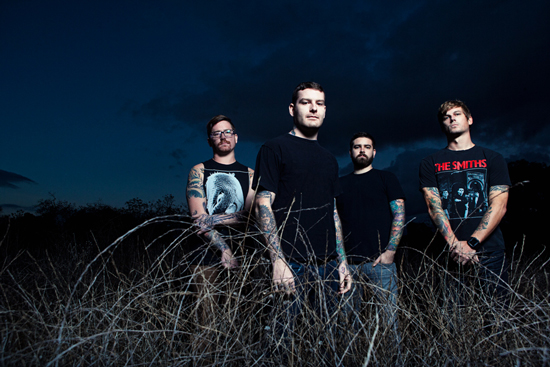 Moho is dead. Well the name is at least, opting to change its name and spruce the place up a bit you are now welcomed to NQ Live. NQ you ask? That’s right NQ stands for Northern Quarter just in case you’d forgotten where you are. In my opinion the face lift is nothing more than some cheap veneers over the bar and some swanky urinals. This is the same basement venue it’s always been and I’m hoping the gig tonight lives up to my expectations of Moho gigs.

Handguns. What to say about Handguns? Well for a start they are the right age to legitimately pull off Pop Punk. They are still unable to drink in the US yet they have somehow managed to land a tour with Senses Fail, which is impressive by all accounts. I don’t know if it’s just me getting older and grumpier but I am pretty jealous of their success considering their age. However tonight they are on a tough line up. A relatively unknown band in the UK and coming off the hype of Slam Dunk festival where they have seen a responsive crowd, very few people are moving here. They try really hard to encourage the crowd but people are here to see Sense Fail and that’s obvious. They have a great energy level and they are doing everything a Pop Punk band should but it’s to little avail. They aren’t anything particularly special and to an extent they are better on CD, but it’s great to see a young band with lots energy doing it the old school way. The grumpiness in me knows that this is a band that are at the stage where the only thing that matters to these guys is having a good time and the worst thing about life is the teenage angst (Angst happens to be the name of their debut album). So it’s going to be interesting to watch them grow up feel the true pain and frustration of life and see how their music changes. In the meantime, if you like your Pop Punk chirpy and with a bit of teenage attitude they might be for you.

Marmozets are next up, The first thing that becomes abundantly clear is that this stage is too small for them. Not in a sense that they don’t all fit on, they aren’t massive people, but in a sense that there stage show is bigger than this room let alone the stage. They start out playing and they look like a caged wild animal. Prowling the stage and biding their time before an escape can be made. This caged ferocity mixed with the blistering guitars has bamboozled this crowd. They have absolutely no idea what’s going on but they look like they are enjoying it. As the set progresses guitarist Jack Bottomley seizes a moment and takes off into the crowd and it’s almost like the audience don’t see him. There is enough going on onstage that that could be excused. It’s great to see him weaving in and out of people and still keeping up with the action on stage.

Marmozets are a tough one to judge, It’s really hard to tell whether this band have an incredible energy and stage presence or whether it is just their whole hearted absorption in their music. Whatever it is, it’s fun to watch and has definitely got the crowd’s attention. I’m not going to pretend that I myself am not greatly confused by this band, as they confuse the hell out of me. Growing up I used to hate bands who messed around with timing and destroyed the fret board in songs because it was the realm of the pretentious, and that just really isn’t me at all. However with Marmozets, it strangely feels refreshing and honest and there isn’t a pretentious edge to it at all. They are growing on me and by the time Born Young and Free comes out I’m singing my little heart out. Jack’s stage escape seems to set off a trend and one by one the entire band takes turns wandering off into the crowd. Before long the entire band including the drummer and drum kit have relocated into the crowd. The crowd are enthralled and cluster round like kids watching a school fight and it brings a great set to a climactic finish. It makes you wonder though, if it’s that easy to move a drum kit into the crowd, why does it take bands so long to set up?

Last but no means least Senses Fail take to the stage. I have wanted to see Senses Fail ever since I first heard From the Depths of Dreams released through Drive Thru Records back in 2002, but they are one of those bands I haven’t ever had the chance to see. They’ve changed a hell of a lot since then both through line up and music style and their new hardcore inspired record ‘Renacer’ has just hit the shelves, so I’m excited to see how they approach this set. T

he first thing you notice when they come on is unlike the other bands tonight their sound is not crazy loud. They have a real controlled sound where every instrument is distinguishable, the quality is very similar to that of their record apart from the obvious room noise. At first the crowd are barely moving as they open with a track from the new record. Is this crowd just really nervous? Do they not know the songs yet? Do they just need a kick up the Arse? Turns out what they actually needed was a song that they all knew the words to, to start them off. Mixing a couple of tracks from Let it Enfold You livens up the crowd and they start to really move. For such an aggressive and sometimes very dark band, they all look ecstatic to be on stage and look really happy to be in front of this crowd. To be fair it would be odd if they didn’t enjoy every second of what they were doing. They are musically really tight and work as a unit to bring a great mix of new and old tracks that seems seamless.

I almost expected there to be a distinguishable difference between the new songs and the old ones but they compliment each other brilliantly are a welcome addition to what is already a colourful set. Buddy addressees the crowd a few times during the set and it was a little sad to hear him as he’s quite a negative guy. He tries to make a few jokes at the expense of people he doesn’t like and a few people around lap up the insults. One particular thing that ground my gears was his lack of British nature knowledge. Apparently the reason that the US wasn’t built up by American Indians was because the US has so many dangerous animals, in particular bears. Whereas the UK has always been free from dangerous animals. Unfortunately it is bad form to try and correct people while they’re onstage so I had to keep it to myself, but for those who didn’t know, bears inhabited the UK until possibly at the very latest the 1100’s but were forced to extinction by hunters and trappers. So basically the UK had to deal with dangerous animals as well, we just killed them all before they harmed us. Suck it Buddy, go fight a bear.

Anyway, that aside Senses Fail produced a well constructed and executed set and the crowd lapped up every second, going to prove that the ten years they have been together have been well deserved and there should in my estimation be many more years of Sense Fail to come. Unless Buddy gets eaten by a bear.