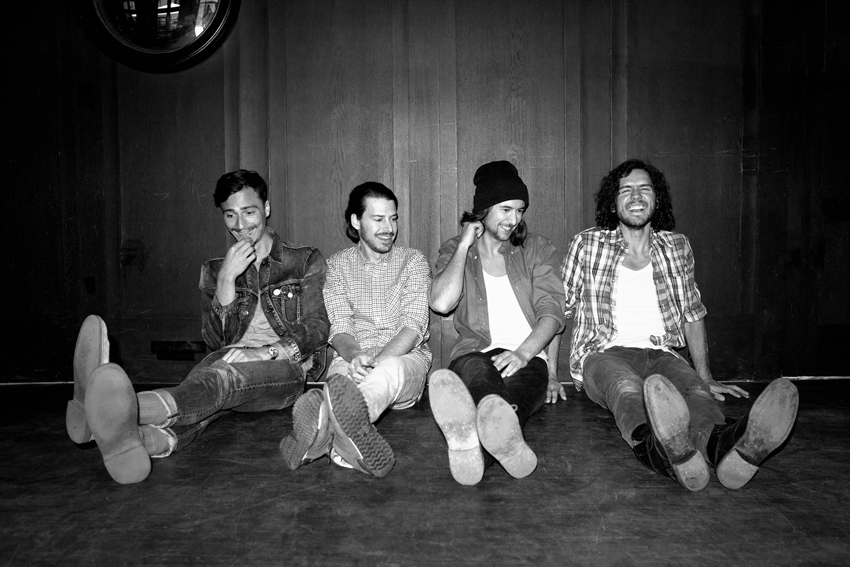 ABBY are a 4-piece band that seamlessly bridges the divide between the worlds of rock and dance music. Their famously energetic live shows are a visceral and high-octane mix of rock concert and rave.  The name ABBY derives from a musical concept whereby the songs form a ‘narrative story mosaic’ that fills in as the listener hears more songs.

Hailing from Berlin, Abby had a quick catch up with Chris Droney from Glasswerk about the latest with the German 4 piece.

Glasswerk: So, you guys are known for connecting rock and dance music, how did this initially come about? Was it something you set out to do, or was it a more fluid thing?

Filou: To be honest this is something that just happened. We always try to stay in progress and develop our sound but in the end it’s all about having fun! So who knows how the next record will be like.

Glasswerk: The video for your current single, Streets, is quite captivating in that it captures many life experiences. Where did the idea for this come from?

Filou: First of all you need to know that the entire idea of our band is us telling the story of Abby through Abby. So that is why we came up with the idea of showing memories of Abby’s life out of her perspective. That the video turned out as well as it did is because of “Wolf & Lamm”, a Berlin based video company.

Glasswerk: Your 6 track EP Blood and Water will be out here in the UK this summer, is Streets a good representation of what we can expect to hear?

Filou: I would say “Streets” shows one side of our music but you can not get the entire picture in one song. I would also say without going into details on the music in particular, the EP shows a lot more and different emotions.

Glasswerk: Your live shows are almost infamous, why do you think, that is?

Filou: It’s hard to say if you’ve never been in the audience yourself ;). But I believe first of all it’s about the music that is most of the time easy to dance to and then about the energy you’re creating on stage and the easiness to let it all out. We enjoy that a lot and I also think we are simply easy to party with.

Glasswerk: How did you guys find SXSW? And what has been your favourite show so far?

Filou: SXSW is a great festival but very stressful. We didn’t really spend much time in Austin but what we saw was quiet impressive. To name just one favourite show is quiet hard but Dockville festival in 2012 was amazing. We also had an amazing show in NY and we enjoyed actually every show in London very much. It feels always a bit more special to play outside of Germany.

Glasswerk: Is there any show coming up that you are particularly looking forward to?

Filou: We are going to play “Melt” festival in Germany this year. This is going to be a nice one! And also “Wilderness” festival. This will be our first festival in the Uk! But in general we love playing live and you never know what happens.

Glasswerk: What can you tell us about the Abby Remix EP?

Filou: We have worked with big influential DJs who live in Berlin and who loved our music and remixed our songs. We will have a “Remix EP” coming out on “Life & Death” label June 24th, we have the luck of being supported by DJs like Tale of Us, Clockwork, Alex Smoke and DJ Tennis. It’s all very exciting, they travel the world and we keep on hearing people all over the globe dancing to our remixes.

Glasswerk: On your website, you’ve got an open sketchbook, which you guys update from time to time. It almost forms a story, what made you decide to do this?

Glasswerk: Finally, after listening to your full live set you’ve posted on your website, when can we expect you back in the UK?

Filou: We are coming back in early august to play Wilderness Festival and we’re about to announce a show in London for August 9th, promoted by Mean Fiddler, pre-sale tickets will go on sale very soon.

Besides all the band’s recording activity, and signing a major publishing deal with BMG/Chrysalis, ABBY have been busy on the live circuit, selling out London shows for Mean Fiddler at Relentless Garage, Barfly and most recently the Borderline, in addition to venturing to the US for appearances at SXSW, as well as New York’s Arlene’s Grocery and LA’s Bootleg Theatre.

After support shows opening for Everything Everything, And You Will Know Us By The Trail of Dead and The Virgins, the live dates keep adding up for ABBY.

UK festivals will be announced shortly and 2013 looks set to be a big year for Abby!

Having brought the interactive, tribal party atmosphere of a dance club to a rock ’n’ roll set, Abby are filling venues and winning fans.