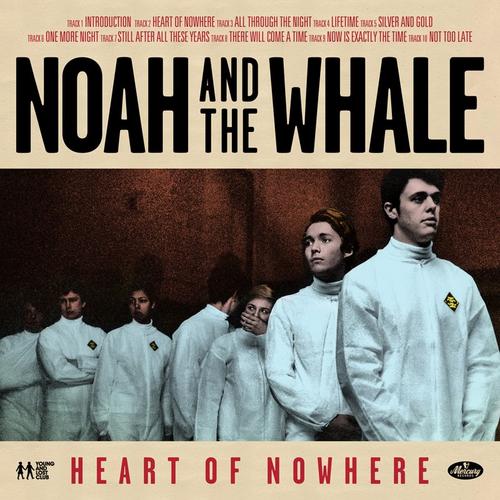 Noah And The Whale – Heart Of Nowhere

It’s always difficult to know what to expect from Noah And The Whale. From the sugary summer goodness of breakout hit 5 Years Time, to the heartbroken melancholy of sophomore album The First Days Of Spring, the Twickenham quintet like to keep us guessing. They are a band that has always retained a sense of forward momentum no matter what the sonic nature of the music itself. Indeed, last time out on 2011’s Last Night on Earth we were treated to another handbrake turn as Charlie Fink and co embraced synthesisers, chugging Springsteen rhythms and Lou Reed inspired character portrayals. Singles L.I.F.E.G.O.E.S.O.N and Tonight’s The Kind of Night in particular pointed to a new found slickness and commercial appeal that saw the record go platinum.

Their upcoming 4th record Heart Of Nowhere plays like a successful consolidation of these different guises. Recorded live over two weeks at Mark Knopflers British Grove studios in west London, it also feels like a more organic record than its predecessors. Songs like Still After These Years and There Will Come A Time are superbly arranged and reveal a band high on confidence after the success of their previous record. Crucially, listeners will find the most reward thinking of the album as a whole rather than as a collection of individual songs. Many tracks seem to reference one another and while we’re not talking about a concept album per se, the themes of adolescence, friendship and reminiscence are certainly present throughout.

“We grew up, drifted apart/ Now you’re getting married/While I’m waiting for my life to start.” Sings Fink on standout track Lifetime, a reflective yet musically upbeat take on the changing situations that present themselves with the transition into adulthood. The string arrangement here and most effectively on the title track itself are adventurous without ever becoming overblown and serve the expertly crafted songs perfectly. The highlight here though is undoubtedly the final track Not Too Late. Its beautifully ambient progression recalls the subtleties of The First Days Of Spring era NATW whilst the lyric “I want to find my own way to be a man” neatly encapsulates the ending of adolescence/coming of age theme of the record. It’s up there with the best work they’ve ever done.

A short film also titled Heart Of Nowhere and directed by Charlie Fink will act as a companion piece to the album and will be screened as part of a four-week residency titled A Month Of Sundays (a night of music and film) at the Palace Theatre in London’s West End beginning on April 28th. They will also play a variety of dates around the UK, including Liverpool Sound City, Manchester Opera House and Wilderness Festival.

For more information head to www.noahandthewhale.com