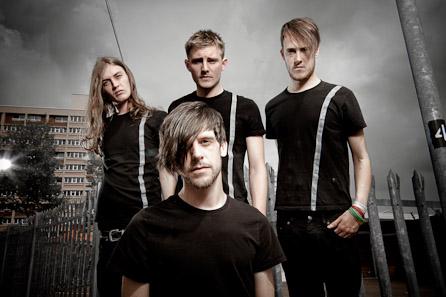 We sent Zoe Edwards to speak to Exeter based alt-metallers Idiom at Takedown Festival this year. Check out what they had to say here:

You guys have been in the band for quite a while – how do you keep yourselves motivated and what you’re doing fresh and exciting?

Chris – It’s quite easy when it’s all you ever want to do! It’s just what we do – we don’t really think about the time scale or anything like that.

Matt – We’re just really good friends I think. As a band you always go through stuff that’s hard, maybe you fall out or whatever but I think because we’ve been in a band for so long, we’ve done all that before we’ve got where we are now so we’re just such good mates that we’re past all that. It’s just fun from now on out!

Chris – We’re only happy when we’re on tour.

Why would you want to live anywhere other than a van?!

Chris – Exactly, it’s only up from there – we could upgrade to a bus!

You’re a bit more experimental than a lot of the bands out there at the moment – how do you go about finding your sound?

Matt – I think it’s really important not to change your music just because of what’s in at the time. A lot of bands are coming up with new sub genres or whatever and we’re just 4 guys who love the same music. We love hip hop, we love bouncy metal, love poppy stuff you know, if it’s got good hooks in it and it’s bouncy we love it. We’ve only ever aimed to be bouncy and fun. Everything else is just the trills that we put on I suppose.

Chris – We really just make music for ourselves. We know what’s a good song and what’s a bad song and we just try and write good songs!

Do you think more bands should try and break out of genres?

Matt – Yeah totally. We’ve actually just done a song with Benji from Skindred and Shaun from The Blackout. We wanted it to be really different. We brought them in really to show that it doesn’t really matter what genre it’s in, if it makes you groove and you like it it doesn’t matter!

I love that! Can’t wait to hear it! What’s coming up for you after that then?

Matt- We’ve got an album coming out on June the 1st, we’re releasing that at Camden rocks festival, then we’ve got redfest, download…

Chris – A few one off gigs at the moment with festival season then hopefully touring the autumn and a bit more recording.

It’s all go! What bands are you listening to at the moment?

Matt – It’s funny talking about not being in a scene, but a band I can’t stop listening to is Bring Me The Horizon, a band I didn’t think I’d ever really get into, but their last too records…some bands are cool because they’re cool and some bands work really hard at it. They’ve worked really hard to get a sound out of their image, because they were an image band first. You know, myspace made them big and all that. Right now they’re really proving that they deserve to be where they are, and I love that and the new album. That and the new Architects!

Chris – I really love the new Let Live album. It’s got everything – every dynamic, every hook, every instrumental. Everything you need! And apparently they’re sick live so I want to see them.

What’s been you’re highlight as a band so far, if you could pick one?

Matt – It would probably have to be touring with 36 Crazyfists and DevilDriver on the arena tour…we’d played the O2 smaller rooms with Skindred before but it was amazing to do the main rooms. I got to sing with Crazyfists as well so that was probably my highlight!

Chris – Same. I actually love Coal Chamber so touring with Dez Fafara and DevilDriver was amazing. But just being in a band is what I’ve wanted to do since I was 13 so it’s all going good so far! Going to festivals, getting a free drink…the dream.

Let’s talk about rock music at the moment – it seems like there’s a lot going on, are you seeing changes?

Matt – It’s hard to stay around as a band, and it looks like it’s easy to pop up right now. There are a lot of new bands but it’s a lot harder to stay as a touring act. We were at hit the deck festival and a couple of bands didn’t play because they broke up, the same with this festival. Music is in a state now where you have to really work hard to stay there. Look at how hard Skindred are still working even now, they’re not sitting back in a comfortable position like Limp Bizkit are. And I think you can really hear that in a band’s music. Like, our new album is so much better than our other albums because we’ve had to work so hard up to this point. I saw Don Broco recently and they energy they delivered…they go mad! I don’t remember bands like Metallica having to move like we do these days. You have to be hanging of stuff, swinging of things….

I saw Pure Love recently and they were literally climbing up the walls.

Matt – A few of our friends are in that band, there’s literally nothing like them!

Do you think energy is the most important thing in rock bands now?

Chris – That’s the only thing. We’re very much driven off our energy. We go off because we love our music, but like we said to stand out now you have to do something special. Luckily for us we’ve always done it, since day one we go as crazy as we can. You have to work so hard to even be recognized and with the internet, you’ve got the entire planet against you, you have to compete with every other band on the planet…and that’s quite difficult!

That’s really quite daunting! And your albums all ready to go?

Matt – Yeah, we’re just finishing up, getting the artwork sorted…we’ve just signed to EMI for the distribution and we’ve got our own independent label for the online stuff so I’m really excited about it. Our fans have been waiting 3 years for a new record from us and now it seems to be all falling into place!

Great well I look forward to hearing it! Thanks for talking to me guys.