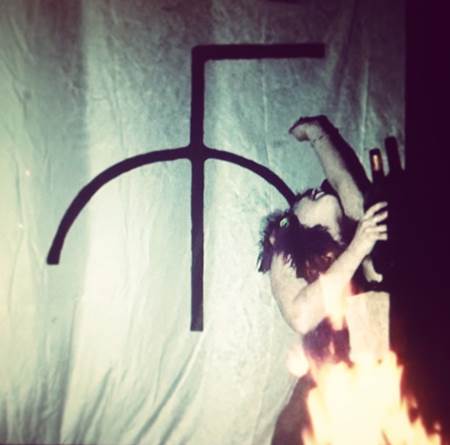 Fist City have unveiled their killer new video for forthcoming single ‘Boring Kids’ set for release on July 1st. This slice of greatness drops a week before their album “It’s 1983, Grow Up” is released in the UK for the very first time via Black Tent Press on July 8th.

The band had a pro filmmaker lined up for this new video, but it unfortunately didn’t work out, so they decided to film it themselves by throwing a weird party, getting fucked up and telling their buddies to dress up like freaks and film that shit. Sometimes it’s better just to do it yourself.

The track itself was formed from a political and religious minefield as explained here by guitarist Evan Van Reekum:

2. Upon the election of Mayor Nensh, i I was shocked to see some of my Calgarian peers reacting in a horrible way – saying things like “ain’t no f****n p**i gonna run my city”. People were throwing bricks through his campaign office windows – his campaign colour was purple, so naturally there was this pathetic backlash about him being gay. However, it was GREAT to realize that people like this were grossly outnumbered – and finally, the bullies were really just making absolute fools out of themselves in the public spotlight.

3. Bits of this song also reference times when someone you love makes a half-hearted annoying attempt to “change” and swear off a bunch of crap just to put a bandaid on their lives and call themselves “better”. People do this shit all the time. Grow up, shave your balls smooth and attack some of the real issues that are underneath all these symptoms that cause you to have to swear off meat or booze or drugs. Maybe you’re fucked up. Maybe you’re depressed, an alcoholic, a drug addict etc… DEAL WITH THE HEAVY S**T. Don’t just try to change for a week. Life doesn’t work like that. Quit crying wolf.

“It’s 1983, Grow Up” is Fist City’s second full length release and graced the top ten on Canada’s independent airwaves last year. Led by catchy tracks such as ‘Endless Bummer’, ‘Boring Kids’ and ‘Creeps’, the album is a self-produced undiscovered gem.