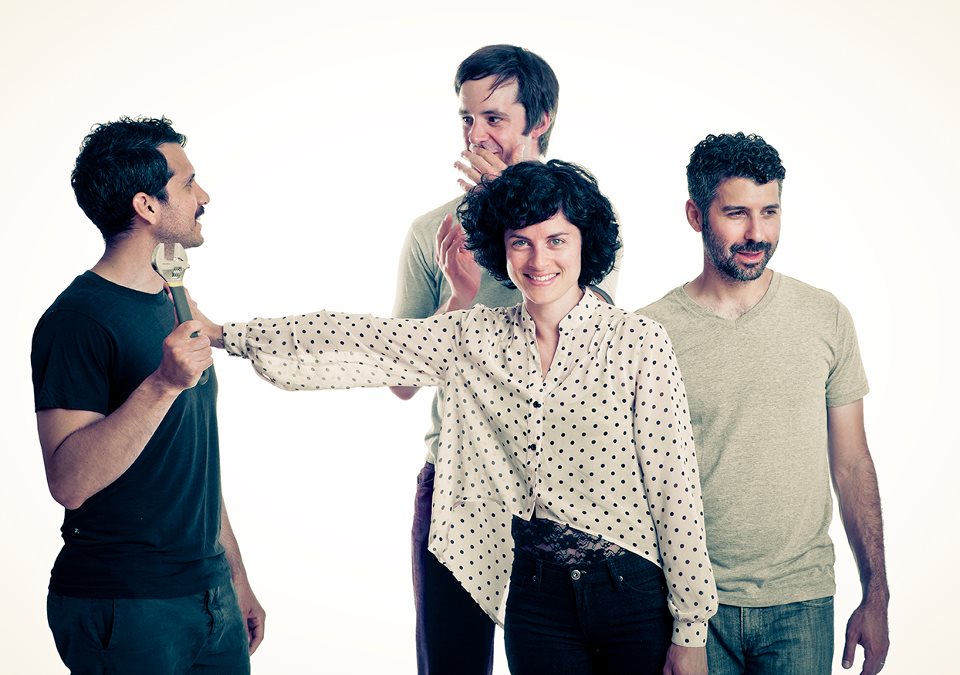 Suffering slightly from the post Sound City Festival malaise that usually descends over Liverpool in the May bank holiday weekend, a balmy Tuesday evening still draws in its fair share of bearded and bespectacled music fans for the debut Merseyside performance from Yoni Wolf’s latest incarnation WHY? Formerly one third of experimental US hip-hop trio Clouddead, Wolf strode out on his own under the WHY? moniker on 2005’s Elephant Eyelash and returned late in 2012 with a subtly superb addition to his canon, Mumps Etc. which was jam packed full of understated and witty observations drawled in his inimitable nasal style and stop start flow over a wonderful mish-mash of cross-pollinated genres executed perfectly by his more than able backing band.

First up tonight though are Other Earth, stripped back to a two piece from their regular outfit Mother Earth and lacking their live drummer, not that you would notice as they creep slowly to a pleasing crescendo through a mixture of ambient electronica writhing between crushing distorted bass riffs and booming drum samples. Jay Freeman’s snaking bass lines and hypnotic rhythms provide a solid anchor amongst George Maund’s chaotic and intricate time signatures and when Other Earth connect, they really connect. There are moments when the complex arpeggiated keyboards don’t quite loop in synchronicity with the crack of the snare drum and the details of the sound are lost slightly in a muddy mix, but it would be churlish to pick up on such slight flaws in a performance which otherwise is a solid display of musicianship and a good understanding of building complex, rhythmic, layered music. A short set with a sheepish exit leaves us looking forward to their next outing.

Halls, by contrast, are the audio equivalent of a Tesco ‘just ham’ sandwich. Devoid of personality and sucked into an enjoyment vacuum of their own creation, the three piece really struggle to connect with the audience on any level. Looking slightly anaemic and Vitamin D deficient (which is a real job amongst the crowd present tonight, this writer included), it might be cruel to poke fun as Halls clearly lack much touring experience and seem deeply uncomfortable onstage tonight as one member explains he’s just split up with girlfriend and is having a tough old time; the band come across as underprepared and overwhelmed by the whole experience. To give them their due, musically they succeed in delivering a tight performance, but their bland take on ambient soundscapes creates a chasm of depression that causes the audience to recede to the outer edges of the Kazimier, and as their laptop line gives way leaving them unable to perform their final song, we all breathe a collective sigh of relief as they shuffle dejectedly off stage.

As Yoni Wolf and the rest of WHY? stride down the stairs to a rapturous reception, the crowd draws tighter and the atmosphere changes from apprehension to elation as the charismatic front man declares triumphantly “We’re finally in the ‘Pool!” Wasting no time in getting stuck in, the band delve headfirst into a treasure trove of lesser-known and brand new songs that the audience lap up. Pacing the stage like a caged animal, Yoni seems nervous at first but soon settles into a gentle patter with the audience and allows his trademark lyrical style to take the forefront, eschewing any kind of stage trickery for solid delivery and pitch perfect vocals. Material from Mumps Etc is well received and faithfully reproduced live showcasing just how far WHY? have come since their inception, but older tracks Good Friday and The Hollows draw equally strong reactions and highlight a clearly dedicated section of the audience.

During a lull in the set Yoni asks the crowd “are you comatose or contemplative right now guys? Both? Right answer” and as someone in the front row lights up an industrial grade doobie the band seem to relax another notch and launch into newer material from Mumps including the excellent Strawberries, Waterlines, Kevin’s Cancer and Bitter Thoughts, but stand-out track and single Sod In The Seed is disappointingly absent from tonight’s set. It’s a testament to the band that they manage to carry the majority of the set on the strength of their old material, something that could easily be attributed to Wolf’s intelligent and involving lyrics, and musically the 5 piece are sublime – tight as it gets and sonically faithful to the recording, with just enough swagger and swing to make for a slightly different live experience.

Yoni shines as a true character and as he comments on the faux-baroque décor of the Kazimier, saying he “feels like a madam in a brothel” his brother Josiah quips “maybe you should get a pistol for your garter” leaving the quietly contemplative crowd exiting the venue with smiles on their faces and a warm glow from WHY?’s delicate and humble performance.