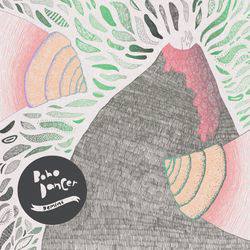 Danish trio Boho Dancer first came together in Aarhus in 2009 and their Nordic folk-pop sound has gained them a large following in Scandinavia. The name comes from a Joni Mitchell song, and her influence shows up often in their music. The excellent Gemini is the group’s debut album and should serve to raise their profile in the UK.

Gemini is the perfect name for an album that has such a sweet sound yet also has an undercurrent of real sadness that runs right through it. Ida Wenøe’s enchanting vocals are the focus of the music, her lovely smooth tones capturing the duality of the music perfectly as they float over the atmospheric backing from Símun Mohr (bass, vocal, guitar) and Asker Bjørk (drums, vocal, guitar).

Bohemian Child starts oddly with a deep chat before Wenøe’s vocals come in, deeply emotional and almost keening. The track then develops into a gentle acoustic folk song with a dark feel, yet also a catchy edge. Fictional Reasons immediately picks up the pace, strong vocals over a great bass line in a passionate pop song. Like Rain is possibly the most complex track on the album. Male and female vocals intertwine nicely over orchestral sounds and the harmonies are quite beautiful.

Caldera starts off as a simple folk song, then grows and develops into something much more profound, a meditation on responding to life changing events. Slept On A Silver Platter is perhaps the best track on the album, another with a quiet start that explodes, the vocals having a sultry feel as they cut through a bass heavy mix.

Epicene has a soft acoustic feel, with darkness just below the surface, as it smoulders without ever quite catching light. The restraint teases and delights at the same time. Loving Creatures is gentle and soothing, the soaring vocals and atmospheric howls making it evocative yet somehow uplifting at the same time. The title track Gemini epitomises the dual themes of the album, a song about twins focusing on the conflict between taking risks and fearing the outcome. Light and dark fight it out in an eternal struggle.

The Clerk Is another slow acoustic track, reflecting on identity and image, the vocals high and plaintive, almost child like in places. Martin is perhaps the album’s one weak track, a piano led love song with sections where the vocals fade, sounding distant, and it doesn’t quote work. But the closing Waiting On A Summer (Never To Come) is slow and intense, the vocals initially pained and melancholic before building to a screamed crescendo of immense power and then falling to end on a slow lament.

Gemini is a fine album that has a lot more going on than might first appear. There is a mystical feel at times and a depth to the poetic lyrics that is worthy of study. And it sounds damned good too, marrying great instrumental work with a quite beautiful vocal performance. Boho Dancer are an impressive trio and the sheer scale of this album shows great musical ambition. To succeed in producing something so varied and so powerful bodes well for a bright future.