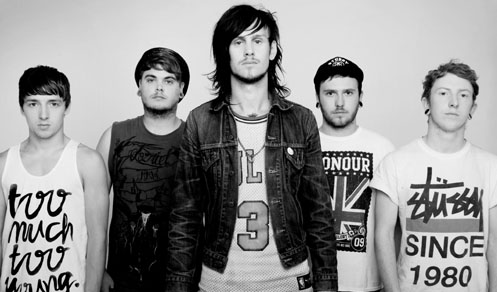 While She Sleeps – Slade Rooms, Wolverhampton

It’s a soggy, miserable, grey day in Wolverhampton, but a ripple of excitement passes through the long queue stretching from the entrance to Slade Rooms and halfway down the street. While She Sleeps, whose live reputation precedes them, are playing in Wolverhampton for the first time, and as a one-off gig before they head off to Europe and then the studio, its sure to be something special.

Birmingham metallers Sirens are making full use of this opportunity to win new fans. The six-piece are sincere and passionate, and they can play. Having toured with the likes of Continents and Carcer City, they’re one of many bands representing the British metalcore scene, and vocalist Rob Clarke wastes little time in winning over a roomful of strangers. With tunes like ‘End of The World’, from their free-to-download debut EP, they’re sure to make their mark.

Dead Harts are veterans in comparison, and also on the up after their time on the toilet circuit; they’ll be sharing a stage with The Devil Wears Prada later this year. Their time touring extensively with While She Sleeps has made them a force to be reckoned with – vocalist Matthew Baxendale has the crowd up and moving, a circle pit, and with favourites like ‘Leeches’ and ‘CTRL ALT Defeat’, the Sheffield quintet show Wolverhampton just what they’re capable of.

While She Sleeps are the kind of band that make causing chaos almost an art form; one song in, and fists are flailing, throats being screamed raw and everybody in the room spellbound. Loz Taylor is a master – he cajoles and curses pits into being, insists on crowdsurfing, and demands a wall of death. The air is thick and heavy with sweat and riffs and the thrum of the bass as the band tear through a seven-song set comprising of their biggest hits. From the first chant of ‘Death Toll’, to the last scream of Sean’s guitar on the uplifting ‘Seven Hills’, Wolverhampton is with the five-piece. And as the mic is dropped and Loz flings himself into the crowd, you know that everyone is thinking that tonight was over far, far too soon.