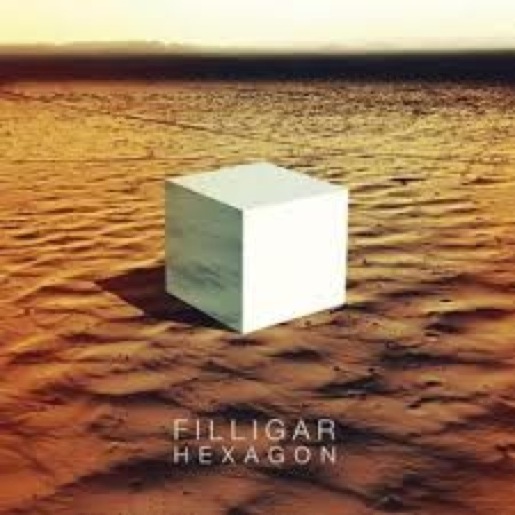 Hexagon is the fifth album from Chicago rockers Filligar and it follows a line of similar solid indie rock releases. Its twelve tracks come in at just under an hour of music, mostly straight up rockers but with enough touches of blues and country influences to keep things interesting. The album cover shows a cube and the lyrics booklet comes on one large piece of paper with instructions to make it into a cube. How that fits with an album called Hexagon, I don’t quite get … maybe I’m missing something.

The band, made up of Casey Gibson and brothers Johnny, Teddy and Pete Mathias, has a reputation in the US as a hard working and exciting live act, but for me their music doesn’t seem to translate quite so well to the recording studio. Perhaps some of the energy and spontaneity gets lost along the way, making this merely a decent rock album rather than a great one.

There are several tracks worthy of note though. The opener New Local is a solid rock track. Knock Yourself Out starts slowly with a slight country tinge before building. It sounds good, although the lyrics consist mostly of the title being repeated. Lock & Key sees more of a blues influence take hold, and the extended instrumental break with a lovely piano sound added to the guitars is electric. Culture Bleach starts with a fine bass line that runs through the track giving it a grumbling and powerful feel. And closer Trepador starts with a lovely burst of acoustic guitar, this one a more mellow track than most with an upbeat feel.

There are also a couple of good lengthy songs on the album. Money On The Dark Horse comes in at almost eight minutes of dirty guitar rock, and this one sounds like it will be a great live track. It’s anthemic, has great guitar hooks and an organ sound that anchors it nicely. Digging For Water is over six minutes long, staring slowly and building into something close to a southern rock feel with a howling harmonica.

Filligar are a talented band, and they have crafted a place for themselves in the rock world with a solid sound that has few frills. This album will go down well with the band’s fans although I don’t expect it to make too many converts. But there is enough here to suggest that their live shows will continue to be well worth seeing – and the band are expected in the UK later this year.