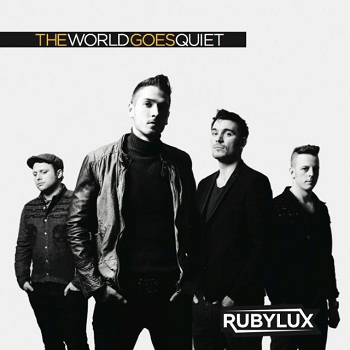 The World Goes Quiet is the second album from Brighton’s Rubylux and is full of the passionate pop/ rock songs that have gained them a reputation as an exciting live band. Although they are known for their “guerrilla gigs”, street performances put together at short notice, there is more of a stadium rock feel to many of the album’s tracks.

This is basically a much bigger album than the band’s 2010 debut Fake Control. The songwriting has more scope, the production is much more powerful and the sound has an anthemic quality while also being radio friendly. The four piece band, made up of lead singer and guitarist Rob Irving, bassist Clark Coslett-Hughes, keyboard player Adam Harris and drummer Mike Hall, have taken their music to a new level.

The album opens with its lead single and title track, and immediately hits top speed, as the intro soars in emotional style, before fading as Irving’s strong vocals come in. The chorus is engaging and catchy, perfect for radio. The five minute long Black Sun, the album’s longest track follows. A bold and sweeping song with a lovely instrumental section led by Harris, this is one is an epic made for the big stage.

Softer tracks like I Don’t Want Paradise and the lovely Spiral give variety and show another side to Rubylux. Love Without A Cause is a nice piano ballad built around Coslett-Hughes’ strong bass line. And the beautiful acoustic Lovers Of New York could just be the album’s best track, a real heartfelt gem of a song that is so different from the big rock sound, yet retains its power and energy.

There are also many other big tracks. The keyboard intro to Red Moon Falls precedes some powerful drumming from Hall and another big chorus. Order Me A Double has some lovely guitar work and is basically a solid rock track. And the closing Sound Of Light opens with a soft violin before growing into another sweeping track that ends the album with one last high point.

The World Goes Quiet sees the next stage in the development of Rubylux and it is an exciting one. The scope and scale of this album shows the band’s ability to write big arena-rock songs but also to come up with passionate ballads. With a fine sense of melody and some lovely songwriting, they have created an album that showcases a great deal of talent very nicely.