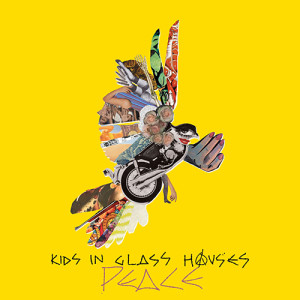 With Peace, Kids In Glass houses have made the move back to their roots, in an album filled with pop hooks and heavy in melodies. The previous release, In Gold Blood, was a lauded critically but sadly split the fan base in two. Now, back on track in this fan-funded spectacle, the Welsh quintet have undoubtedly released the most fun album of the year.

Peace kicks off with it’s title track, a song which grabs you from the get go and doesn’t let up. The first thing we hear is one of the things Kids In Glass Houses is known best for, and that’s Aled Phillips’ distinctive vocals, instantly reminding us of what we’ve been missing.

From there we move to the lead single, ‘Drive’, a pop anthem with a massive guitar hook, one that will find you dancing in a way only Kids In Glass Houses can muster. Other infective tracks of this type include ‘V-I-People’, ‘Novacaine’ and ‘Black Cloud’.

Far from a one trick pony, the album has it’s fair share of emotive tracks, most visibly album closer ‘Nightcrawler’ and the great ‘Storm Chasers’. The latter is a song which doesn’t bite on first listen, but one which grows over time and can quickly become one of your favourites on the record.

Another song which gets better at every turn, and in between of the pop and emotive is ‘Up All Night’. Here we see Phillips’ leading the charge over the musical master class which is evident on all 10 tracks, his vocals touching on the past as he mentions “if it’s gold you found / beneath the dirt / it’s yours to keep”, a nod to the band’s previous work.