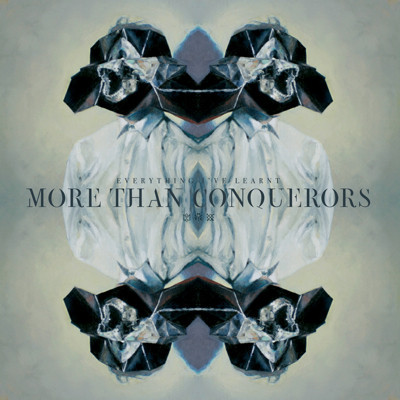 More Than Conquerors – Everything I’ve Learnt

The most surprising thing about Everything I’ve Learnt is that it is a debut record. More Than Conquerors show more maturity and promise in this album than many bands who’ve been around for years.

The Belfast four piece have been working the local circuit for a while and have released a few EPs and singles, but this is the first full length that the band have put out. The band’s influences have been named as the likes of Reuben, Manchester Orchestra and Biffy Clyro to name a few, and Everything I’ve Learnt seems like an apt name for their first full length – you can hear their influences throughout the scope of the record.

Opener ‘All That We Can’ instantly shows us what we are in for, as Kris Platt’s distinctive voice drives the song over his and his band mate’s music. Platt laments how he “fell apart / when you were near me”, in such a haunting, matter of fact way that the greatest of vocalists can be jealous.

And while the lyrics throughout Everything I’ve Learnt are relatable on one level or another, this album is about much more than that. The musicianship is on par with the likes of their influences, evident on tracks like the previously released ‘Pits Of Old’ as well as songs like ‘Jaw’ and ‘Bring Me To the Blood Bank’ .

Another track which is a stand out among stand out songs is ‘Try-Antlers’, a song which sounds like it could’ve been written by Brand New, has a with a huge guitar riff throughout, gripping the listener instantly. A possible single, it has an extra punch that some songs may be missing. But that is not to take away from any of the 11 songs on Everything I’ve Learnt, as each have their own punches to pull.

More Than Conquerors is certainly a band to keep an eye on, as with this one release they have leap-frogged over their peers in an instant. More promising than anyone could have anticipated, Everything I’ve Learnt has a lot to teach any striving musicians.

Download: Try-Antlers, Take Me To The Blood Bank, Jaw, Pits Of Old

Tracklist:
All That We Can
Pits Of Old
Smoke, Trees, Lungs, Knees
Amounts To Nothing
Jaw
When The Well Runs Dry
Bring Me To The Blood Bank
Temper
Try-Antlers
Six Weeks
Hearth And Home