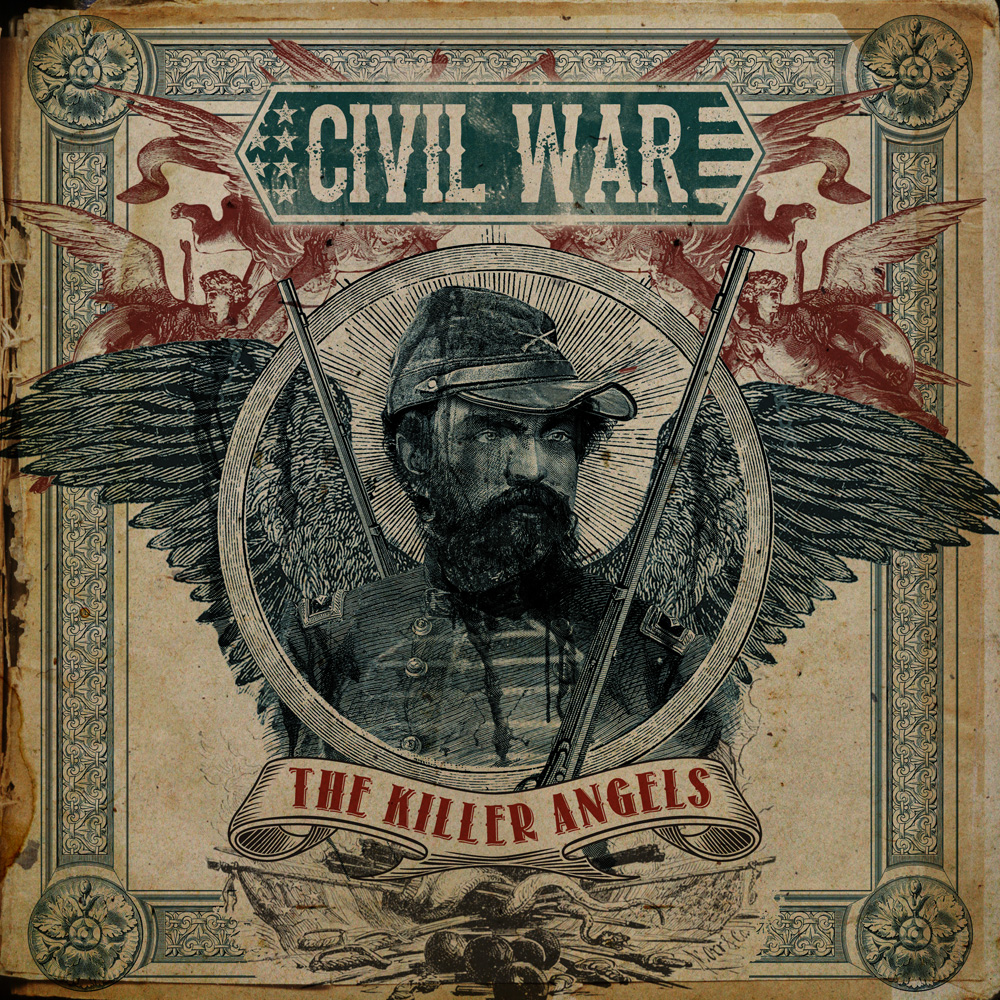 Civil War formed in 2012 out of Sabaton, the Swedish power metal band known for its songs about historical wars. And from this debut album it seems that the new group, comprising ex Sabaton members Daniel Mullback, Daniel Myhr, Rikard Sundén and Oskar Montelius as well as former technician Stefan “Pizza” Eriksson and the fine vocalist Nils Patrik Johansson, has a similar style.

The Killer Angels is a powerful collection of eleven songs that manages to take typical metal sounds and themes and create music that is not at all stereotypical. The album title comes from a book about the Battle Of Gettysburg in the American Civil War, and there is a fair amount of the expected death and glory in the songs. But they carry it off well.

Nils Patrik Johansson’s vocals stand out on practically every song. He has a great reputation as a metal vocalist, having sung with a number of very good bands including Astral Doors and Wuthering Heights, and puts in a stellar performance here. Johnansson’s range is very wide, his power excellent and he has the knack of producing strong melodic vocals that suit the music well without resorting to screaming. The new Dio? Perhaps that’s going too far but there are certainly similarities to the great man.

There is also some fine guitar work throughout the album as Oskar Montelius and Rikard Sundén trade licks and fast solos. Not the shredding or thrash style, real good, old fashioned metal solos of the type that you just don’t hear enough of these days. These guys know that melody and technique are important, not just pace and volume. And the keyboards of Daniel Myhr add a lot to the sound, giving texture and weight to several songs.

The stand out track on the album is St Patrick’s Day. The guitar melodies are distinctly Celtic and the song is in places restrained, yet with moments of real portent. It’s a hard rock rebel song with a massive chanted chorus of the type that Thin Lizzy were so good at – think Roisin Dubh or Emerald. Opening track King Of The Sun builds nicely from a slow start and the epic sounding Rome Is Falling is also excellent. The Civil War themed closing pairing of Gettysberg, with its military drum beat and defiant chants, and the keyboard driven March Across The Belt close the album in great style.

This album is one that classic rock and metal fans will love. The fast and fluid style of the music, immensely powerful yet with good melodies too, and the fine vocals combine in great style. Civil War may be a new band but the pedigree of the musicians involved shines through on every track.