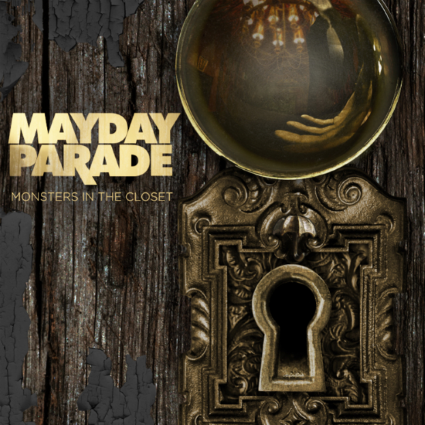 Mayday Parade – Monsters In The Closet

They have definitely grown and matured. Even though it is clear that there is the same amount of pop punk with a rock energy, and the songs are still as drama fuelled and sexually charged as they were, the synth, the guitars, and the successful formula that Mayday Parade have developed well themselves: straightforward songs and a catchy chorus.

Produced by Kenneth Mount and Zack Odem (All Time Low, Summer Set, We Are The In Crowd) you can tell that they know the band’s intentions well. A clear pop sound, and a well finished piece. Even though there are no stand out alone tracks, that eliminates the talk about filler, and there is a song to fulfil all elements of the Mayday Parade fan.

The torment of existence, as you can probably tell by the name is riff tastic – and wouldn’t be out of place on a classic rock album. The woahs and the gang vocals are all still there, it wouldn’t be a mayday parade album without it – particularly true of 12 through 15 (that’s the name of the track not the number of tracks).

There is your classic piano anthem (Even Robots Need Blankets) and an abundance of clever titles for their songs, but an album, like those before it, quintessentially about girls. Even one of their tracks is named as such. Learning from mistakes, reliving mistakes, getting over and getting under (sorry, not sorry). But all in all this is an album that shows that even if they have not changed drastically, this sound, 6 years down the line from their debut, is from a band that have evolved as people and are truly comfortable with their sound.