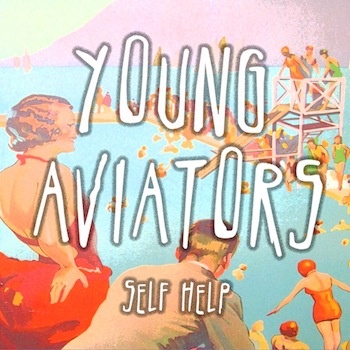 Irish trio Young Aviators are now based in Glasgow, and Self Help is their very promising debut album. Their high energy music is built around raw and fuzzy guitar riffs and great vocal harmonies, and with songs that describe the struggles of young people in the modern world, there is a real 80s new wave feel to the album. The release comes through Electric Honey, the in-house label of Glasgow’s Stow College, who gave us early material from such musical luminaries as Snow Patrol, Belle & Sebastian and Biffy Clyro.

Young Aviators’ songs are generally fast, short and to the point. The nine tracks on Self Help all come in at around three minutes, and the entire album is under half an hour long. But each tells a story in a dynamic fashion and the production manages to capture a great deal of the energy that is a trademark of a band already building a reputation as a fine live act. It may be a little unpolished at times but is perhaps more authentic for the lack of too many studio tricks. My one gripe would be that the drums seem a little low in the mix at times. But the trio – Declan McKay (guitar, vocals), Kyle Haughey (bass, backing vocals) and John Markey (drums, backing vocals) – clearly have talent.

The album is bookended by two tracks that are really two halves of the one song. Opener Sunrise On The Motorway dials the pace to high from the start with an optimistic and melodic air to its breakneck sound, while closer Sunset On The Motorway starts slowly and finally dissolves into a fuzz filled psychedelic ending.

The single Forward Thinking perhaps encapsulates Young Aviators best. A bass heavy song about feeling trapped that is written with humour, yet has an angry feel and a massive chant along chorus. A Love To Change Your Ways is also very good, an upbeat summertime song that will get any gig moving. First Day In Earth has a lovely reverb heavy sound, the vocals strong over another fine bass line. Future Pill, a live favourite, explodes into life with a great riff.

The piano led Deathrays In Disneyland is very different from the rest. It’s an excellent slower track and adds much to the album. But both We’ve Got Names For Folk Like You and Rejection Level have a heavily distorted sound that perhaps doesn’t work as well as the band’s core approach.

Young Aviators are a young, passionate and energetic band. They have plenty to say about the lot of young people in society and they do so in a very entertaining manner. In a musical world of heavily polished and overproduced bands writing bland love songs it is great to hear such raw talent and vitality given a chance to shine.