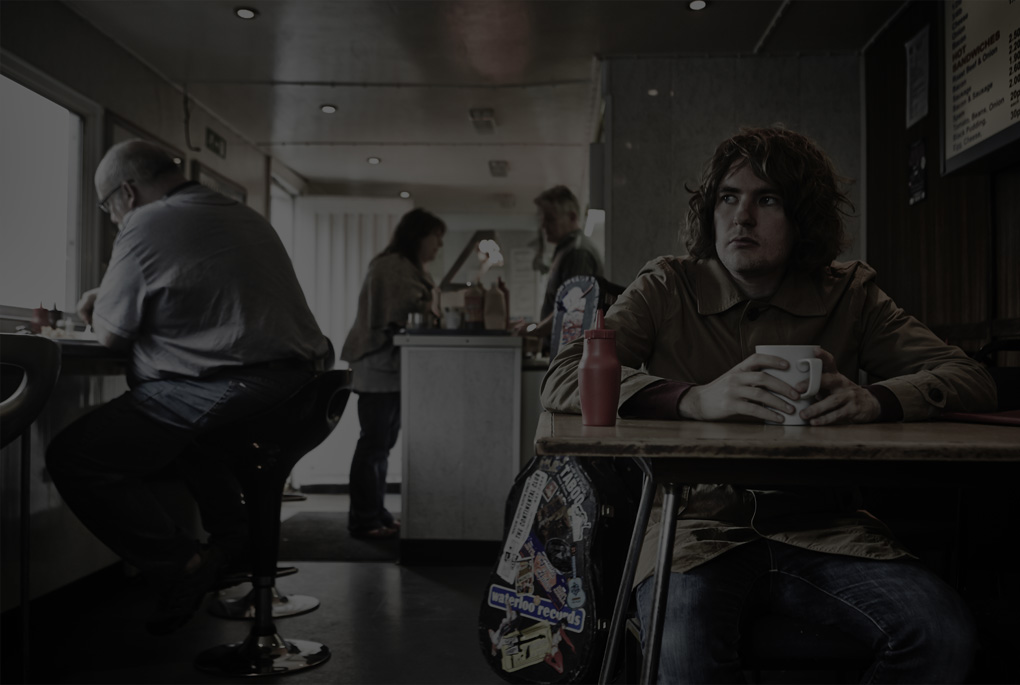 We caught up with Sheffield based songwriter Mike Hughes around his recent tour dates supporting Miles Kane to talk about his penchant for dancing, new single (That Girl Is…) Misery, exactly what constitutes Apocalyptic Gospel Blues and more…

Hi Mike – what do we find you doing today?
Well I’m staring at a brick wall. Not metaphorically, but an actual one, there is a guitar next to me too. Don’t be surprised if the next tune is called Brick Wall Blues.

A nice easy one to get going – what are your first memories of making music?
I was given a little Casio keyboard by the Hughes’ one Chrimbmas and I remember my dad playing this amazingly layered piece. It was something that I tried to emulate for months after, until I learnt that he had actually pressed the demo button. Always a joker my dad.

And what’s on your stereo at the moment? Anything we might not have heard?
I’ve just got the new Bill Callahan album, there’s not much new there if you’re not into him, but the man’s pretty peerless for me.

If you don’t mind us saying, you’ve come out of relative obscurity very quickly, already winning plaudits at BBC6 – bizarre, wonderful, or both?
Yeah, definitely both… although it doesn’t seem that quick as everything seems to have taken so long from the original recordings but 6music were the first to pick up on the single… All that stuff about helping new music, they really do believe in it.

How did you find working with Ross Orton? Was there a lot of input from him on the recordings?
The sessions with Ross were really easy. I always thought he would be great because he gets amazing drum sounds. That’s usually the thing that takes the longest on any session. We loaded the gear in at 11 and he had the drum sounded sorted by 2. The man’s a machine. We actually chopped all the drums up which you can’t really tell on the record but it meant he could get the sound he wanted. Once we had everything down it was just a case of me and him stripping everything back and giving the drums space. He basically gave me the drums of death. His point was ‘lets make the drums sound immense, and everything else will fit in’

You’ve got a very classic sound – is that something that came naturally or that you’ve deliberately honed?
I suppose the song structures are quite classic, but whenever you try to write a certain way it never comes out like that. I suppose you just want the songs to have character…

Is it difficult to capture the spirit of that analogue sounding dusty musical trail you seem to be moseying down in the digital age?
It is in some respects, there are obviously plug ins that try and recreate past sounds but they always fall short. I’m never trying to chase a certain sound, just communicate the idea of the song… Ross showed me how easy it can be.

We saw a request for flamenco dancers on your facebook page and can only assume it’s for a video, a fantastic addition to your live show, or you’re a secret mover and shaker – which is it?
Well Ive defo been known to bust some moves, but I’d rather leave it to the professionals. The director of the new video said he needed a Flamenco dancer and I was obviously slightly hurt that he looked past me as a potential performer. At first I thought he meant Flamingo, which on reflection, may have been a more interesting proposition.

How did the connection with Miles and Mr.Sharrock come about? We know Jay from about town and he’s an excellent drummer…
I’m gonna go into Keef mode but Jay is the coolest cat, man. The connection came about through Phil Anderson, who also plays with Miles, he saw me playing in Sheffield and basically said we should get in the studio and get the songs down. He then got the rest of the lads from the Miles band and we went in and basically recorded everything in about 2 weeks. The boys got the songs really quickly, Jay came in and after about 5 mins I knew he was gonna make the songs great.

What can we expect from the forthcoming full length?
Well there are currently a few last minute additions which is nice because it keeps it fresh until it’s released. Around the time of recording the album I was getting bored with the lone singer/songwriter sound to be honest, so I wanted something that sounded quite big, so as well as big percussion there are quite alot of layered vocals, so hopefully its just the sound of a mega band going for it.

How are you feeling about the Miles Kane dates? Will they be the largest shows you’ve played? If so, what are you looking forward to/nervous about?
Yeah definitely, they’re the biggest show I’ve done solo and obviously they’re great venues to play. I’ve seen Miles a few times and him and the boys really go for it. So I’ll be warming them up, like a musical hot water bottle.

Where next for Mr. Hughes?
I’m just starting to think about the next single, and then the album next year. I’ll also be doing my own shows towards the end of the year too. And obviously I’ve gotta finish Brick Wall Blues.