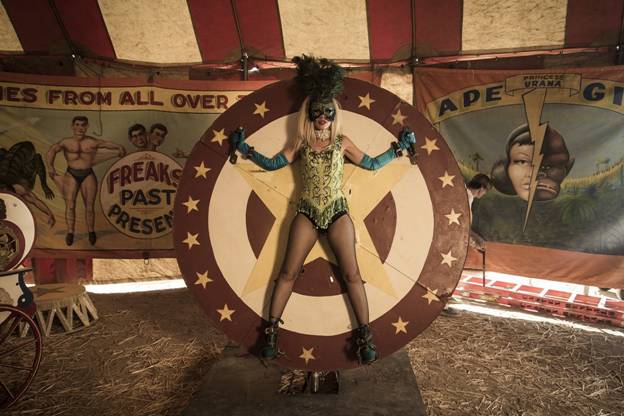 The circus has just rolled into town, and its rocking “Ringmaster” Dave Stewart has a few surprises hidden underneath the big top.

The esteemed singer, songwriter, and guitarist (and Eurythmics co-founder) and his creative collective Weapons Of Mass Entertainment are very proud to unveil the revolutionary short film/music video for “Every Single Night”–the first single from his forthcoming new album Lucky Numbers [Kobalt Label Services], in stores now.

Constantly pushing the envelope, Stewart and Weapons Of Mass Entertainment joined forces with Sound Technology Experts, DTS, in order to provide viewers with an experience unlike anything else in the medium. Together, they filmed the short film/music video in 4K and mixed it in 11.1 surround sound, breaking ground for the art form itself. As a result, it’s an immersive and all-encompassing experience that merges sexy visuals, impeccable songcraft, engaging narrative, and state-of-the-art technology.

Furthermore, the delivery proves equally prescient. Upon availability later this month, users will be able to download a free app featuring the “Every Single Night” music video and experience it in immersive 11.1 surround sound over any pair of headphones, made possible by DTS Headphone:X™. This breakthrough makes it possible for listeners to hear individual sounds in full surround. It preserves how the mix was initially meant to be heard. It’s like being in a professional studio enclosed by 11.1 channels of surround sound.

“Every Single Night” immediately paved the way for innovation. Merging Stewart’s unmistakable croon with featuring Martina McBride’s elegant harmonies, the track itself is a pensive and poetic ode to its creator’s journey. The video was filmed recently under the big top in Riverside, CA and features Dave as the ringmaster with a massive cast including co-founder of the Lucha VaVoom Rita D’Albert, with members from the high-octane troupe of Mexican-style lucha libre wrestling and traditional burlesque. The clip expands on those themes within a seductive, surreal circus world replete with wondrous characters and even a live elephant.

Lucky Numbers is the third album in three years for the self-declared The Ringmaster General after last year’s release of the same name and 2011’s The Blackbird Diaries. For Lucky Numbers, the singer, songwriter and guitarist assembled the same team of Nashville’s finest that were on the previous two, though instead of working in co-producer/engineer John McBride’s Nashville studio, Stewart shifted the recording sessions to a boat in the South Pacific.