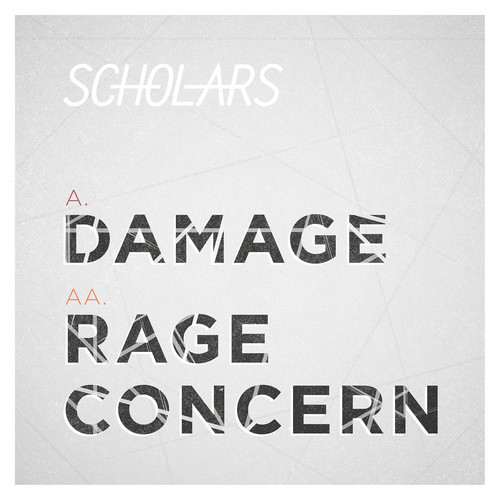 Following their critically acclaimed debut album ‘Always Lead, Never Follow’ (Banquet Records) earlier this year, Scholars are due to release ‘Damage’ / ‘Rage Concern’ as a double a-side single on 14th October. The Hemel Hempstead rock quintet have been quietly gaining momentum in the background for a while now, and with this new single it’s easy to see why heads are starting to turn.

Damage is a thrashing yet rhythmic blend of Billy Talent’s vicious stabbing guitars, basslines groovier than the best of The Clash and choruses featuring soaring melodies that have made household names out of contemporaries in Young Guns and The Blackout.

By contrast Rage Concern opens with a beefy AC/DC riff before degenerating into a scuzzy punk verse that recalls Refused at their most rabid and, dare we say it, the now tainted gang vocals and harmonies that made huge singles of tracks like Fake Sound Of Progress for former Welsh heavyweights and they who must not be named, Lostprophets.

Scholars’ very particular brand of angular post-punk meets mainstream rock leaves them on the fringes of the scene with bands like Turbowolf and Hawk Eyes but this is by no means a bad thing. In a similar vein, they’re peddling accessible experimental rock that’s pushing a few boundaries and trying something new

Also worth a mention is the special “damaged” vinyl release of the single, which is basically a vinyl that’s been smashed to pieces and will never play, but let’s face it, who actually listens to the vinyls they buy these days?