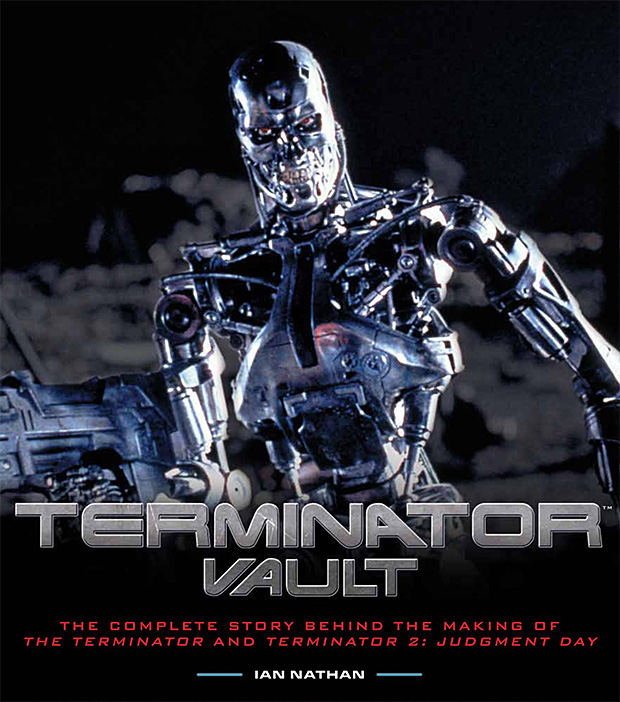 The who “vault” idea can sometimes be used as a hook or gimmick to lure punters in, and yet forget to provide a decent amount of actual coverage, especially in the writing department. Ian Nathan thankfully had a better idea of actually delivering a book that is as densely researched and written as it is laid out.

When used well, the “vault” idea acts as a physical exemplifier of materials pertinent to the subject matter. Posters, stills, original design reproductions – perhaps in this tomb the idea is best represented  by the reproduced Polaroid you get of Sarah Connor from the end of the original film. It’s perhaps a very simple addition to include, but a very important one that will make the experience of this book all the more rich.

Stepping back a bit – Schwarzenegger does a one page introduction, and yes he says I’ll be back, nothing new there. The book then leaps literally from the “Genesis” with a look at inspirations such as Asimov’s I Robot and Crichton’s Westworld.

There is also a look at Cameron’s early career with Roger Corman leading up to the film being made.  Obviously Cameron’s time as a designer is key to meeting all the right people around the right time before time came for him to make his career leap.

Plenty of new interviews have been conducted as the book trails through the first two films’ history.  There is writing on the sequels and various spin offs and impact the franchise has made towards the end, but the primary focus is of the Cameron days.

The only down side really is that these films are already very well documented in books and particularly in DVD/Blu-ray extras. There are existing documentaries and commentaries from the horse’s mouth – so really if you know the subject well then much of this information will be at the very least familiar to you.

But as this is a fan-aimed release, any fan of the franchise who is looking for a book then this one is of a high standard. Time and effort has gone into the design and packaging with many familiar behind the scenes shots as well as a few more less familiar to keep the material fresh. The book will sit very proudly next to the Alien Vault (also put together by Ian Nathan) that perhaps people may already own.  We can now speculate as to which high impact movie(s) Ian Nathan may set his sights on next?