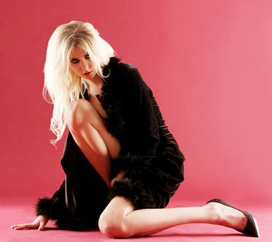 The Pretty Reckless – Going To Hell

As Taylor Momsen and her chaos-loving, hard-hitting rock band The Pretty Reckless continue to steamroll through the U.S. and Canada on their current headlining tour they’ve premiered the official video for “Going To Hell”. The clip was directed by Tim Mattia (Marilyn Manson Cage The Elephant, Young Guns) The song is the title track from their highly anticipated sophomore full-length album out early 2014 on Cooking Vinyl.

“The new video for ‘Going to Hell’ captures the right look for the sound of the band,” says Momsen. It’s a subtle blast of sins and rock and roll meant to be watched over and over until the real meaning of the song sinks in. We’re psyched for it to come out and for the fans to see it.”

So far The Pretty Reckless has previewed three songs off Going To Hell on their website Goingtohell.xxx that was launched with a haunting album trailer, followed by the lyric video for the bracing “Follow Me Down” and a teaser for “Burn.” The latter song shows another side of the hard rocking band. Against a lone acoustic guitar, Momsen vocally digs deep into her lyrics about a dark, fractured relationship. Taylor sat down with Rollingstone.com to recount the process of recording this album after having to start over following Hurricane Sandy’s wrath that ravaged their studio; check out the interview here: http://tinyurl.com/ncpznvk.

The Pretty Reckless formed in 2009 and released their debut album Light Me Up in 2010 and a follow- up EP Hit Me Like A Man in 2012. After two years on the road supporting Light Me Up the band has risen through rock ‘n’ roll’s ranks to become a polarizing presence. Over the course of their debut and EP, the quartet has sold over 1 million combined albums and digital tracks and have supported Evanescence, Guns N’ Roses and Marilyn Manson on tour in addition to headline runs in both the U.S. and abroad. Now, Momsen and her bandmates are delivering nothing short of killer performances on their current “Going To Hell Tour” with a set list including new material off Going To Hell and the group’s debut LP Light Me Up.