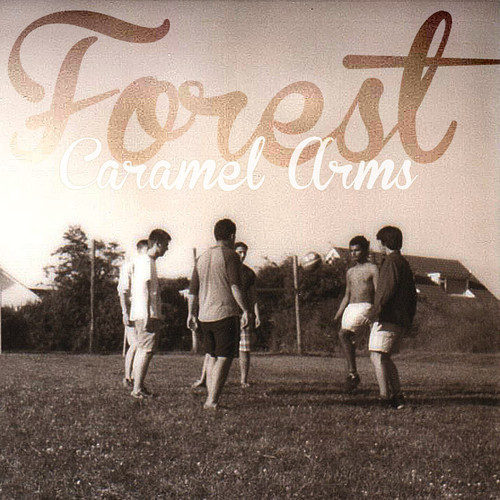 Cambridge indie band Forest release their second EP Caramel Arms next week. The four track EP can be purchased on limited edition vanilla vinyl, or as a digital download. Following on from the well received debut Sweetcure EP released in May 2013, there is again an experimental feel among the four very different tracks. But then as the five members of the band are only eighteen, the fact that they are still trying to find their sound is perhaps to be expected.

The fast paced Coaster opens the EP, a guitar driven track with the kind of big, fuzzy sound that mixes power pop and indie very well. There’s a nice rhythm to the song built around the guitar melody and big harmony vocals. 99 follows, again guitar based but this time with a much cleaner sound that gives more emphasis to the vocals.

Warm Tyres is probably the best of the four tracks, heading straight into shoegaze territory with its shimmering guitars and warm feel. There is something uplifting about the steady beat to this one, which is underpinned by a lovely bass line. The closing Oh has more of a lo-fi feel, the sound a little distant as the vocals soar over more fuzzy guitars. It’s emotionally strong, as bursts of guitar sneak through the sonic fog to give it substance.