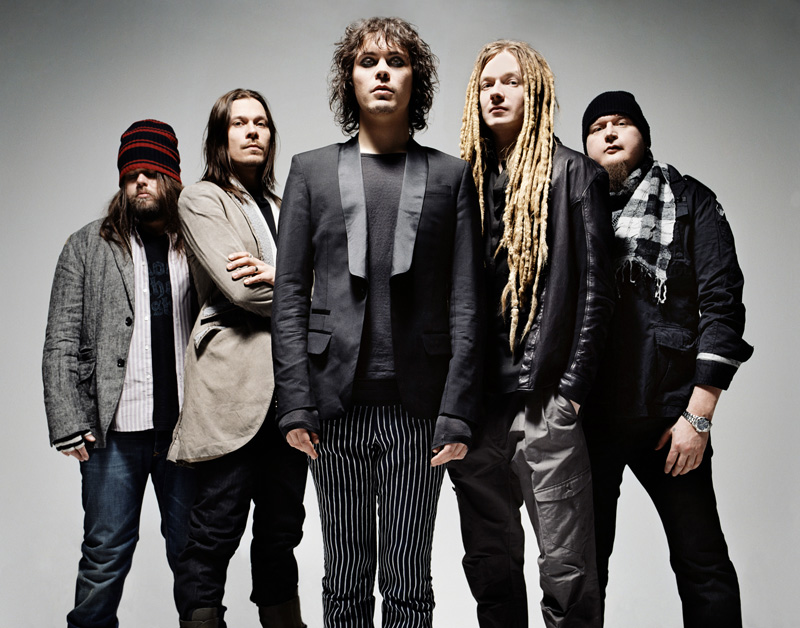 Halloween is without a doubt the perfect day to see Finnish rockers HIM. The gothic group fronted by heartthrob Ville Valo – most famous for their 2003 release Love Metal- finally made a return, with their first UK tour in three years. Whilst this may send most rock bands completely off the radar, it is clear that this has had no impact on the group whatsoever; with their first Koko date showing such a demand that a second date was added. Support for both dates came from personally-picked post-rock group Caspian – which initially seemed like a bizarre choice.

The simplistic heartagram backdrop, dim purple lighting and thin layer of smoke all highlighted the internal romantic décor of the Koko creating a surprisingly eerie atmosphere –perfect for the occasion. Despite the early start, the venue was almost immediately packed; showing the immense level of love the crowd still had for HIM, despite their absence. First on was only support – Caspian. Contrary to any preconceptions of the band, the purely instrumental alternative rock sextet from Massachusetts managed to create an atmosphere and crowd reaction that only 65daysofstatic could render without vocals. Their music varied from heavy riffs to light to carefully constructed arpeggios which all fully captivated the audience leaving them both haunted and moved.

Once the crowd eventually started to settle, the lights dimmed and the slightly unnerving synths of ‘Unleash The Red’ started to play. It was time for what everyone was here for – HIM. For those who grew up in the millennium, the Finnish rockers are still instantly recognisable as they take to the stage; Valo sporting his typical uniform of black, with signature beanie. Opening with new favourite ‘All Lips Go Blue’, followed by what’s arguably their greatest hit ‘Buried Alive By Love’ – HIM took to a ridiculously strong start. With a refreshing set list perfectly crafted by a selection of songs from each album they managed to satisfy all generations of fans. However, their most stand-out song was surprising their Chris Issak cover ‘Wicked Game’ – arguably the best version I’ve personally heard so far. Closing with ‘Funeral Of Hearts’, and naturally following up with an encore consisting of new track ‘Hearts At War’ and Venus Doom’s ’Sleepwalking Past Hope’ Valo and friends proved why they are still so popular after so long.

If you were ever a fan, they’re definitely worth going to see, even if it’s just for the nostalgic factor of it all. Despite not being particularly exciting on stage – though no doubt a part of Ville’s overall persona- they still manage to be enticing, and provide a variety of songs you’ll no doubt remember from your youth.