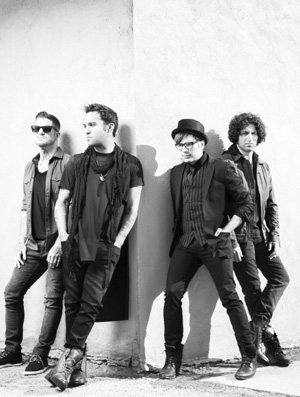 Wearing black masks and with no support band in sight, Fall out Boy made their way on stage a little after 8:30 in the tiny venue that is the O2 Academy, Islington. The event has sold out, as it did within 15 minutes of tickets being available, but seeing as this same band has just sold out their show in Wembley Arena next year, it comes as no surprise that tickets for a 800 capacity show were going to be hard to come by.

But it was here that Fall Out Boy performed a show like no other, one that may not happen again, if not for a very long time. Here was Fall Out Boy at their most intimate, with a crowd who knows and loves their entire back catalogue. The band played songs from all walks of their past, and each was met with an amazing response from the crowd.

Be it the opening track ‘The Phoenix’, from their current album Save Rock And Roll, which immediately ignited the audience into a frenzy, or ‘This Ain’t A Scene…’ from Infinity On High, which created the first mosh pit of the night. Each and every song the band played through was met with huge acclaim.

Seeing a band like Fall Out Boy on a scale such as this is a blessing. Each song made a bit more sense, as you could see each members expression as they played through, as opposed to squinting at an arena from the back, being thankful that you only shelled out £40 for such a ticket. Everyone in the room was within spitting distance of drummer Andy Hurley, and that made all the difference.

Patrick Stump’s vocals were as great and tight as ever, and it’s easy to see that his brief bout as a solo artist has turned him into the frontman he is today. No longer content with leaving Pete Wentz do all the work, Stump now bandies around the stage, microphone in hand, roaring at the crowd like never before. A new man, fresh faced and eager to please.

Wentz himself was not shy to the mic, while he and guitarist Joe Trohman were up to their old antics of jumping around, instrument in tow, owning the stage. As the band ploughed through their archive of hits, it’s tough to pick out what could be considered a highlight, as there was no low point to the show. Obvious tracks like ‘Sugar, We’re Goin’ Down’, ‘Thriller’, ‘Tell That Mick…’ and ‘Dance Dance’ had the crowd in hysterics, while newer tracks like ‘Death Valley’ and ‘Alone Together’ held a different aura, but were met with just as much love.

Ballad ‘Young Volcanoes’ was one clear moment of joy as the entire crowd roared in unison with Stump for the bridge, while the introduction of ‘Love, Sex, Death’ from the band’s new EP Pax-Am Days showcased their love for old school punk, the two minutes of sheer energy that came with the song whipped through and around the venue. Honorable mention is of course fan favourite ‘Sophomore Slump Or Comeback Of The Year’, a track which is loved and revered by many as one of Fall Out Boy’s best.

The encore consisted of the title track from their latest album Save Rock And Roll, Stump doing his best Elton John impression during. This song also saw all band members grab a mic, stand up and, in harmony, sing the closing verse; “oh no we won’t go / cos we don’t know when to quit oh” repeatedly, again setting in stone that the band is here for a while, and that no hiatus can stop them. This was soon followed by fan favourites ‘Thnks Fr Th Mmrs’ and ‘Saturday’ from the band’s first full length Take This To Your Grave.

And with that, the show ended. Fall Out Boy have now played one show in the UK since the release of Save Rock And Roll, and we won’t see them here again until March. And while I hope you have tickets to the Wembley show, I’m sad to say that on matter how great that gig is, it won’t touch on what was witnessed in Islington that Tuesday night in November. Fall Out Boy put on a show that only Fall Out Boy could, and proved once and for all that they are worthy of the status that they’ve earned. They brought their live show right down to basics, and are all the better for it.