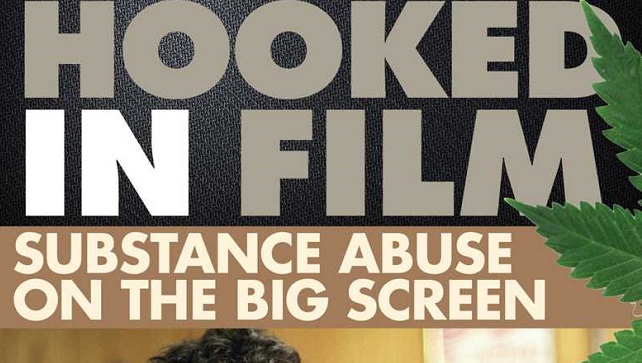 Hooked In Film: Substance Abuse On The Big Screen

Markert has chosen a big and far reaching subject for his latest book published by Scarecrow Press. The problem with the subject of drugs or narcotics is that they can be central to the films plot or characters, drugs may just be a part of the lifestyle of the characters or it maybe what he calls (para-phrasing Hitchcock) a MacGuffin, in other words the thing that carries the plot along in films such as The French Connection with a plot about two cops trying to entrap a notorious French crime boss who is attempting to smuggle heroin into America. What Markert makes clear from the off-set that the book rightly doesn’t include alcohol, for although alcohol can be as damaging as drugs as a form of substance abuse it doesn’t carry the same social or legal stigma.

The author has split the book into several chapters, each one outlining the different types of drug abuse, how they are portrayed in the time and place the film was made and to what extent. The first chapter, after the introduction sets the image and representation of drugs in films made between 1900 – 1959. The reason for this is that drugs were used as an umbrella term, be it marijuana, cocaine or heroin. A few of the opening pages of this chapter are dedicated to how these narcotics were taken or treated domestically including the use of cocaine in coca-cola or how coke was taken to cure toothache. Certain low budget exploitation films were made as public information films which include the now cult Reefer Madness (1936) and Cocaine Fiends (1935), both of which went under the guise as social problem films; and these weren’t the only films of this period, there were a whole slew of them made throughout the 1930s. The 1940s had other problems such as the war. It wasn’t until The Man with the Golden Arm (1956) came along in which Frank Sinatra was shown jacking up that drug addiction was taken seriously rather than the ridiculous jokey and factually inaccurate films that went before it. Another film made the same year, Nicholas Ray’s Bigger Than Life about a teacher and perfectly ordinary suburbanite who becomes addicted to prescription pills that drive him insane gets scant mention.

By the 1960s drugs not only became part of the counter cultural landscape but were also dealt with more seriously and as central themes. The subsequent chapters of the book are set out as follows: on marijuana, heroin, cocaine (including crack cocaine) and drug miscellany (which includes LSD, ecstasy, crystal meth and prescription drug abuse) as well as polydrug use. In these chapters only a handful of films are given much detail and some deal with polydrug use such as Easy Rider (1969) and Trainspotting (1995) – two films that deal with drugs as something central to not only the protagonists social milieu but also to the lifestyle they have chosen. Markert points out through charts and statistics that the amount of films in which drugs played a prominent part died down between the late 1970s through to the late 1980s until the yuppie generation with such films as Bright Lights, Big City made in 1988 deals with cocaine addiction as part of a social set. Indeed, rightly the author challenges the impressions of different drugs belonging to different class, social or ethnic groups highlighting that crack is not necessarily a drug that stays within ghettoised Afro cultures or that cocaine is something that belongs to the white middle classes.

As with his previous book on post 9/11 cinema Markert has chosen to also look at documentaries and freely admits that much of the end part of the book is a part of an evolving culture with crystal meth abuse still growing and brings is bang up to date with discussions on the TV series Breaking Bad and that the popularity of crystal meth or the shake ‘n’ bake method of producing crystal meth has not reached its peak as yet and maybe some years away from doing so. Indeed this particular drug choice is far from being on an ‘epidemic’ scale as yet in the UK. There are equally other drugs that hardly get a mention, if at all including glue sniffing and solvent abuse or ketamine.

There are many films surprisingly missing or not even mentioned once in the book. These include the Cheech and Chong films – aimed directly at pot smoking juveniles as well as Harold and Kumar Go to White Castle (aka: Harold and Kumar Get the Munchies) (2004) despite the latter film being illustrated on the jacket cover of the book. Understandably there are many films missing or passed by throughout the book while others such as the short scene of Woody Allen sneezing on a table of cocaine gets plenty of mention. Although the book mentions non-American films such as Trainspotting and Saving Grace (2000) the stats of the book throughout only focuses on the USA, while acknowledging the ecstasy/rave culture was much stronger in Europe than it was in the US.

Never the less this is a fairly gripping book, more so than others by Markert in which his stats and charts can make for dry reading but he has clearly done extensive research on his subject and brings us right up to date. It would be fair to say that this book may not be of much interest to anyone who has not dabbled in any kind of substance abuse and his stats clearly state than a high percentage of the American population have at some time in their life (even if they claim they didn’t inhale) so the book should find a fairly wide audience for those who have dabbled and love film. At the end of the book the appendixes list both alphabetically and chronologically films that have drugs, either as a by-product of the film or central.