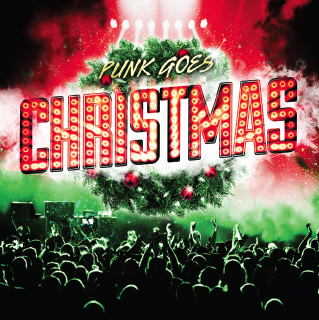 When this dropped on my virtual desk my eyes lit up. I bloody love Christmas! For years I have subjected people to punk rock Christmas compilations, at home, in work, through radio shows, all starting far more early than is acceptable. Having this passed to me really made my day. We are all of course aware that not every Punk Goes… album is a winner, however I genuinely don’t think you can mess up an alternative Christmas album. Why you ask? Because everyone is sick of The Pogues, that’s Why!

Fearless Records have rounded up some pretty heavy hitters for this album, with the likes of New Found Glory, All Time Low, and Yellowcard on the bill it gives you the assurance that there are, at the very least, going to be a couple of good tracks. That hasn’t stopped Fearless sureing up the compilation with a couple of lesser known safe bets. Jason Lancaster (of Go Radio) who I would liken to the Whitney Houston of pop punk and William Becket (formerly The Academy is) give this album enough weight to impress people before the stream even hits your ears, not to mention a cheeky surprise in the appearance from up and coming favourites of mine Real Friends.

This compilation is possibly one of the most exciting things I have listened to in a while, not only because I love Christmas (because that’s a given). Right from the get-go you can tell all these bands have pulled out the stops to make these tracks great. No track on this record has been half arsed or is a carbon copy of the cover they are attempting and they are all actually pretty good and damn entertaining. There may be a touch too much electronic pop from bands like The Summer Set and The Ready Set which I personally wouldn’t class as even rock let alone punk, but it’s bearable because you know Christmas needs a jolly streak.

There are two points we need to be honest on, firstly this isn’t an album that needs to be rated among the greatest albums of all time. It’s an extremely fun seasonal pick me up that will disappear come January only to reappear on next year’s Christmas playlist. The second is; when was the last time you could honestly say the Punk Goes…. compilations were actually all punk bands?

That being said there are some seriously good tracks on this album. My favourite is the track from Atlanta Metal-core band Issues. It absolutely blew me away, the vocal ranges of the ex Woe Is Me front man teamed up with a very subtle but effective metal guitar sound to pound out the pace of the N-sync cover is mind blowingly catchy and infectious. Nicely padded out with gruff metal growls and a twinkly lead guitar it’s up there with the best Christmas songs of all time for me.

You could argue that Man Overboard’s cover of The Kinks – Father Christmas is one to miss for being a little unimaginative, but its nice to have something that is actually a little punk on the album. Maybe its not the best track on its own but it compliments the other songs and adds a little more variety into the mix.

As far as the Christmas catalogue, Punk Goes Christmas is there on the front line bearing the banner for the alternative scene and its doing a damn fine job. I’d much rather hear this album in the charts than some bloke from the TV that a bunch of tasteless people voted for. But if you are a grinch you’ve probably already punch your screen at the mere suggestion that Christmas can be fun, but there is even a song on there for you. Just play track 11 on repeat.