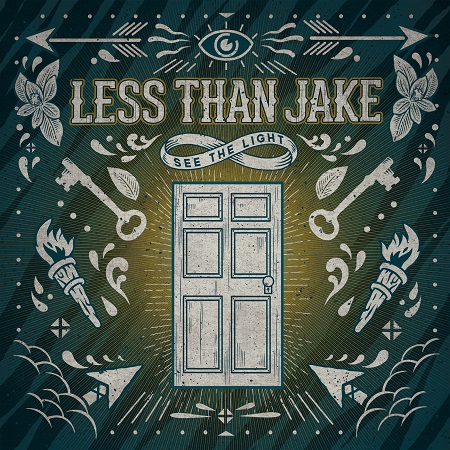 Less Than Jake – See The Light

It’s been a long while since we’ve seen a full length with completely new material from veteran ska punkers Less Than Jake and Ii comes with a certain anxiety for fans. Can a band who have reached their 21st birthday still produce a record that encapsulates the youth and exuberance that made them so popular? After all, we’ve been let down in the past right? There is a glimmer of hope with this new record. Self recorded in Roger’s own studio and once again having the creative freedom that comes from teaming up with indie label Fat Wreck Chords, this could be a welcome return to centre stage for the Gainesville 5 piece.

When I first put this album on it was late at night and what an awful decision that was. This record is the definition of an album that needs to be cranked all the way up to 11. ‘Good Enough’ starts with an extremely slick horn intro that melds perfectly into an upbeat ska punk jam and its enough to melt your heart into a nostalgic puddle. This album oozes energy and although it’s not particularly musically creative (of course arguably when does ska punk need to be) it’ll strike straight into the vain of every reminiscent early 2000 ska kid.

‘See The Light’ isn’t all mile a minute ska punk. Take for example ‘John The Baptist Bones’ which brings a bright and bubbly guitar tone which is on the verge of African high life back to a slow stepping horn section which evens out the albums tempo giving it a sweet ebb and flow. That’s not the only example of this records versatility however, ‘Give Me Something To Believe In Inc.’ gives you a straight ska smile and wink, while ‘Sunstroke’ produces a pop punk beauty that will have you wailing along in no time.

The big thing that makes this album work is that even though LTJ have aged, as all people do, they still know how to make their own music and slipped back comfortably to it.They don’t suit the overproduced In With The Out Crowd label experience, they suit a DIY Indie label release and this is what this album is all over. They have found a sweet spot nestled in the middle between tape deck recording and multi million dollar release and it compliments them to the ground.

It would be a total discredit to this album and LTJ if I didn’t point out that this isn’t a generic LTJ album (not that that’s a thing). It’s not Losing Streak reinvented or a re imagined Borders and Boundaries. This is new material and a new way of doing things in the same old LTJ way. It incorporates the things you want from them and ditches the stuff that hasn’t worked to create an album I would argue that is their best to date (if you ignore all those gorgeous memories of screaming ‘Johnny Quest, he thinks we’re what?’ with a beer in each hand!). Go and and add this to your collection today!